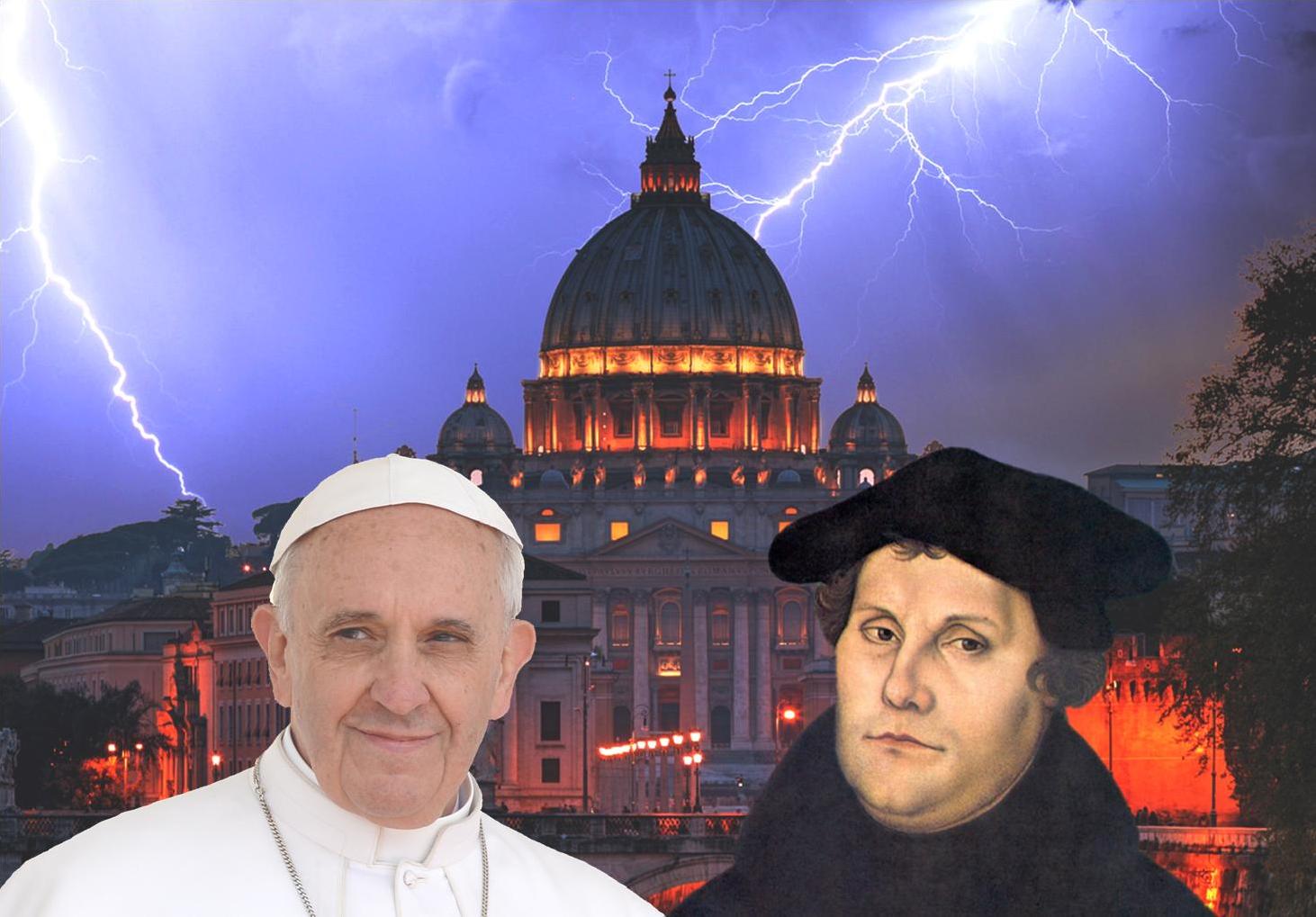 Catholic and Protestant academics published a document urging the Vatican to lift Martin Luther’s excommunication and the Lutheran World Federation to revoke Luther’s condemnation of the Pope as “Antichrist”. [1] Pope Leo X excommunicated Luther in 1521, and Luther proclaimed that the Pope was the Antichrist that same year. This new ecumenical document would eliminate the “buffers” that prevent Protestants and Catholics from mutually recognizing each other as churches.

This is the fruitful outcome of 60 years of ecumenism. This is where interfaith relationship finally leads. Why can’t we see this? Vatican II officially opened ecumenical dialog between Protestants and Catholics in 1962. Now, the ecumenical agents of Rome want Protestants to remove the “Antichrist” title from the papacy and compromised Protestants want Rome to reinstate Martin Luther as a “Catholic” in good standing. We are seeing the re-Catholicization of Protestantism thanks to ecumenism.

“Here the great crisis is coming upon the world. The Scriptures teach that popery is to regain its lost supremacy, and that the fires of persecution will be rekindled through the time serving concessions of the so-called Protestant world. In this time of peril we can stand only as we have the truth and the power of God” (1888 Materials, p. 901).

The term “antichrist” is a biblical characterization. God put that word in the Bible to be applied. “Antichrist” is just another term used to describe the worthless “sons of Belial” (1 Samuel 2:12) who were desecrating the temple of God. It is similar to the “false apostles” (2 Corinthians 11:13) who were deceiving the church of God. The antichrist is another title for the “man of sin” who sits in a temple thinking that he is God (2 Thessalonians 2:3, 4). The Antichrist also describes the same “beast” power that will revive persecution in these last days (Revelation 13:15).

In the same way, as Martin Luther grew in his understanding and appreciation of the Gospel and the Scriptures, he also grew in his recognition that the Papacy was the Antichrist. This was becoming clearer to him as his understanding of the truth increased. Luther opposed the arrogant claims of papal infallibility, a teaching in which the pope presumes to have greater authority than the Bible in religious matters. For Luther, everything was under the judgment of the Scriptures, and he would use the scriptures to judge the church, the church’s teaching and even the pope.

Luther’s battle was with the “ex cathedra” or the seat/chair of the papacy which states that papal proclamations “ex cathedra” are preserved by the Holy Spirit from any possibility of error. And to resist any papal proclamation is to resist the Holy Spirit. Luther responded with his own proclamation: “Spiritus Antichristi est Papa” or “the spirit of the papacy is the Antichrist.” The spirit implied by Luther was the spirit of arrogance which he believed was usurping the Spirit of Christ within the church. Luther’s battle was not so much with the rank and file members of the church. He was not anti-Catholic. He was anti-papal. He rejected the claims of the Papacy and its authority.

What should concern us is not whether this message is considered loving or not. Our only concern for the positions held by Luther on the Antichrist or on any other Protestant teaching is this: Are they true? And can those teachings be sustained by the Scriptures? Would Martin Luther embrace the modern-day Papacy with its unbiblical promotion of pantheism and Mother Earth worship? Would Luther embrace Rome’s deification of nature and equating God as equal to His creation? [2]

Millions of sincere Christians gave their lives for the Protestant faith during the Roman Catholic Inquisition for refusing to compromise God’s word. Are we to imagine that they died in vain? Absolutely not. Can we afford to betray those who gave their lives for our historic faith? Can we afford to betray the God whose hand was guiding the Reformation? We had better not.

“Protestantism shall stretch her hand across the gulf to grasp the hand of the Roman power … and shall make provisions for the propagation of papal falsehoods and delusions, then we may know that the time has come for the marvelous working of Satan and that the end is near” (Last Day Events, p. 131).