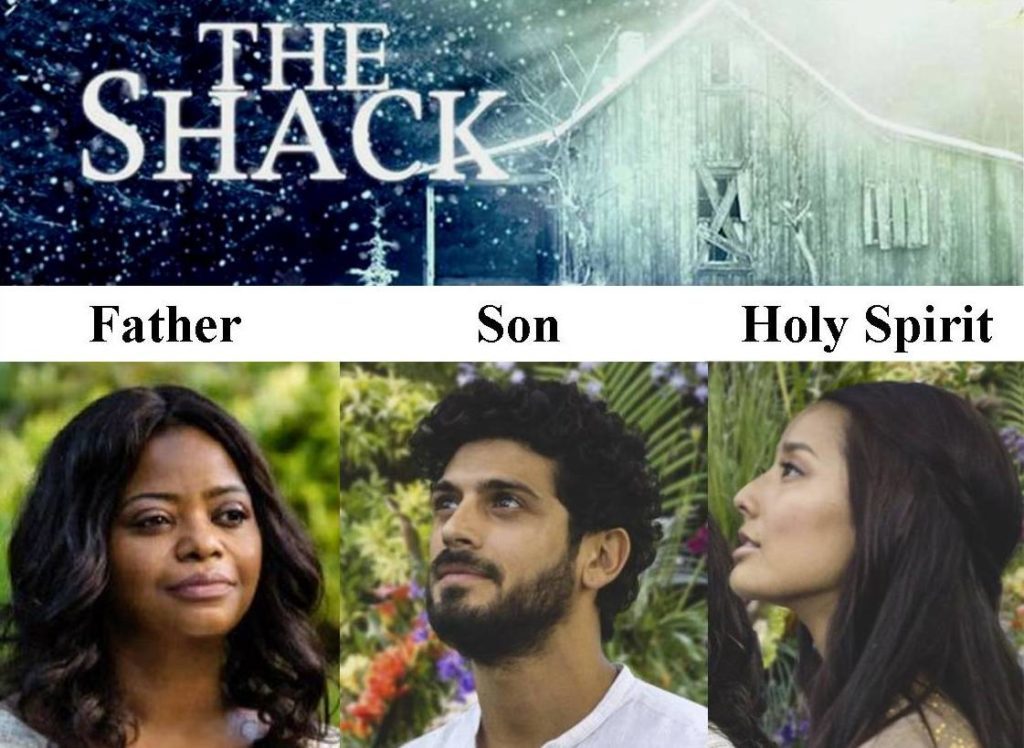 God’s identity is being transformed and reduced to a modern multicultural, new age, all-inclusive, spiritualistic guru who doesn’t judge people, who doesn’t punish sin, who doesn’t believe in hell and who will eventually save all people whether they choose him or not.

A new movie called “The Shack” has the endorsement of more than 1,000 church pastors, priests, ministers, nuns and teachers from every denomination. In the movie God is portrayed as a curvy black, maternal woman called “Papa.” The Holy Spirit is portrayed as an Asian woman. And Jesus looks like a middle-eastern Arab.

God is real; and to portray Him as a big, busty black female is wrong. Jesus clearly tells us that He alone knows the Father intimately and personally.

“All things are delivered unto me of my Father: and no man knoweth the Son, but the Father; neither knoweth any man the Father, save the Son, and [he] to whomsoever the Son will reveal [him].” Matthew 11:27.

And in Matthew 6:9 Jesus instructs us to address God as our “Father” which art in heaven.

To address a female God as “Papa,” as they do in this movie, is creating a gender identity conflict. In other words, traditional genders don’t mean anything because God is anything you want him or her to be. This movie is a reflection of our modern culture that is trying to eliminate and blur gender lines.

What if someone were to make a movie portraying Dr. Martin Luther King Jr. or Malcolm X as Asian females, what then? Would that make it true? Of course not! Portraying these two historical figures as females would create outrage, boycotts, protests and calls of racism.

What if a movie was made portraying Allah as a white female, what then? There would be world-wide cries of religious sacrilege, blasphemy and calls for death.

But making a movie portraying the Creator God, the Lord of Hosts, as a overweight female is accepted and even defended by millions of Christians. Unbelievable! This movie that is being praised in many Christian circles is promoting the false gospel of universalism – that everyone is going to be saved because God is just too merciful to destroy sinners.

“And I will punish the men who are stagnant in spirit, Who say in their hearts, ‘The LORD will not do good or evil.” Zephaniah 1:12.

This very expression was predicted in Scripture as an attitude that God will punish when men say that He will not do anything, neither bless or punish.

“For when they shall say, Peace and safety; then sudden destruction cometh upon them, as travail upon a woman with child; and they shall not escape.” 1 Thessalonians 5:3, 4.

And when men presume to misrepresent God or His holy character, He has something to say to these false characterizations.

“My wrath is kindled against thee, and against thy two friends: for ye have not spoken of me [the thing that is] right.” Job 42:7.

“God allows men a period of probation; but there is a point beyond which divine patience is exhausted, and the judgments of God are sure to follow. The Lord bears long with men, and with cities, mercifully giving warnings to save them from divine wrath; but a time will come when pleadings for mercy will no longer be heard, and the rebellious element that continues to reject the light of truth will be blotted out, in mercy to themselves and to those who would otherwise be influenced by their example” (Prophets and Kings, 276).

New Age depictions of God are not a substitute for reading the Holy Scriptures. We cannot get our information about God from Hollywood. We have to go to the true source of truth. If fact, if Christians were actually reading their Bibles they would run away from these shameful Hollywood productions because the Bible warns us about these very people:

“This know also, that in the last days perilous times shall come. For men shall be lovers of their own selves, covetous, boasters, proud, blasphemers, disobedient to parents, unthankful, unholy, Without natural affection, trucebreakers, false accusers, incontinent, fierce, despisers of those that are good, Traitors, heady, highminded, lovers of pleasures more than lovers of God; Having a form of godliness, but denying the power thereof: from such turn away.” 2 Timothy 3:2-5.