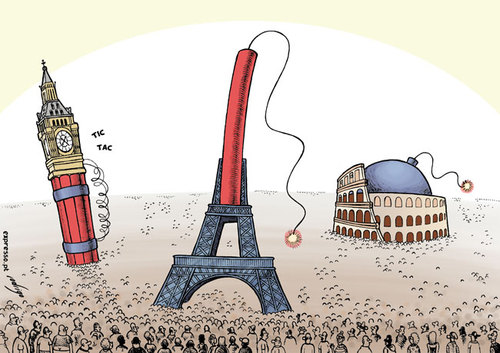 “So likewise ye, when ye shall see all these things, know that it is near, even at the doors.” Matthew 24:33.

The nations of Europe – France, England, Germany, Belgium and others – are surrendering their peace and tranquility to the Islamic terrorists. Europeans have basically accepted that the monthly mass murder and terrorist attacks are just part of the routine in their new lives.

The citizens of United Kingdom have become desensitized with the slew of escalating attacks in Manchester, Westminster, London and Finsbury Park. These terror attacks are no longer “breaking” news but have now become part of the “daily” news cycle.

Politicians will voice both outrage and the need to press together for unity all in the same sentence, and the result is that nothing changes. Others will say a lot of nice words but nothing is done to actually stop the attacks. And this is not just happening in England.

Recently in Belgium another explosion took place at a central train station in another act of terror.

In France the police were the target in another terror-related attack.

This situation in Europe has the masses on edge. Everyone is nervous and everyone is a suspect. In Italy a woman was crushed to death and more that 1,500 people were injured after a group of 30,000 soccer fans panicked at the sound of firecrackers.

The gathering took place at Turin Square to watch a soccer match between Italy and Spain. The stampede started by the explosion of a loud firecracker that was mistaken for a bomb or a gun. The masses started running and screaming in fear and thousands were trampled.

It is dangerous for people to travel to Europe as long as these incidents are escalating. Even if there is no attack, tourists are subject to curfews, lockdowns, surveillance and searches. While terror attacks throughout Europe become more frequent and regular it would be safer and wiser to stay home.

The main problem with the surge of Muslim terror attacks is the unwillingness of those in authority to recognize that Islam, when interpreted and followed literally, is a religion that inspires people to carry out acts of murder against the “infidels.”

And it is doubtful that terror will ever be eliminated in Europe because of the spiritual blindness of its leaders for failing to recognize the existence of evil within their midst.

“For the leaders of this people cause them to err; and they that are led of them are destroyed.” Isaiah 9:16.