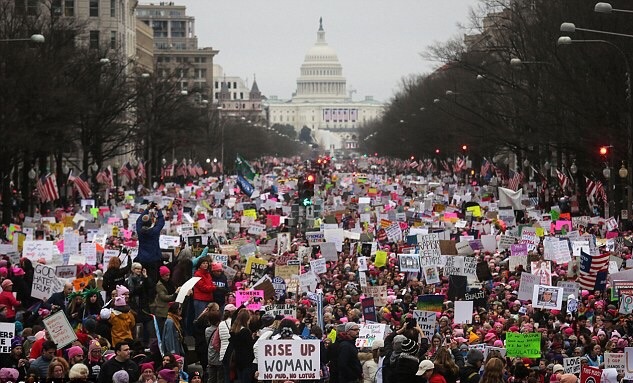 Millions of women marched in Washington D.C. to protest the inauguration of President Trump. They wore hats representing the female sexual organ and they carried signs displaying their dislike for Trump.

Celebrities such as Madonna and Ashly Judd denounced Trump calling him the devil and Hitler. They used foul-mouthed, derogatory words to incite violence, hatred and vulgarity. What was suppose to be a women’s march representing solidarity turned into a vile display of hate, division and obscenity. This is what the media focused on and was broadcast to the entire world. This was the new vision of American women that was showcased to all the other nations.

The women’s march was hijacked by an extremely radical element that was an embarrassment to decent women everywhere. What was supposed to be a protest designed to draw attention to the oppression of women was actually insulting to women because the hate, sexuality and the pink hats depicting women’s sexual organs did more to denigrate women than what they were suppose to be protesting about.

“Who can find a virtuous woman? for her price is far above rubies.” Proverbs 31:10.

These women were boasting and reveling and glorifying in their “nastiness.”

The Bible commands that all people, including women, are to be respected and cherished. But we all have the responsibility to not only demonstrate respect to others, but we also have to show self-respect to ourselves and to our own bodies. What started out as a peaceful protested ended up being branded as a massive display of offensive vulgarity, hate-filled sexuality, and shameful pride and arrogance.

“Likewise, ye husbands, dwell with [them] according to knowledge, giving honour unto the wife, as unto the weaker vessel, and as being heirs together of the grace of life; that your prayers be not hindered.” 1 Peter 3:7.

There are evil forces at play in America (not only at this recent women’s march) that are bringing our nation to new lows in hate, lawlessness and immorality.

Most women throughout America were not protesting, they were horrified at what took place in Washington D.C. We need to pray for our families and for our women because some are becoming dangerous and mentally unstable.