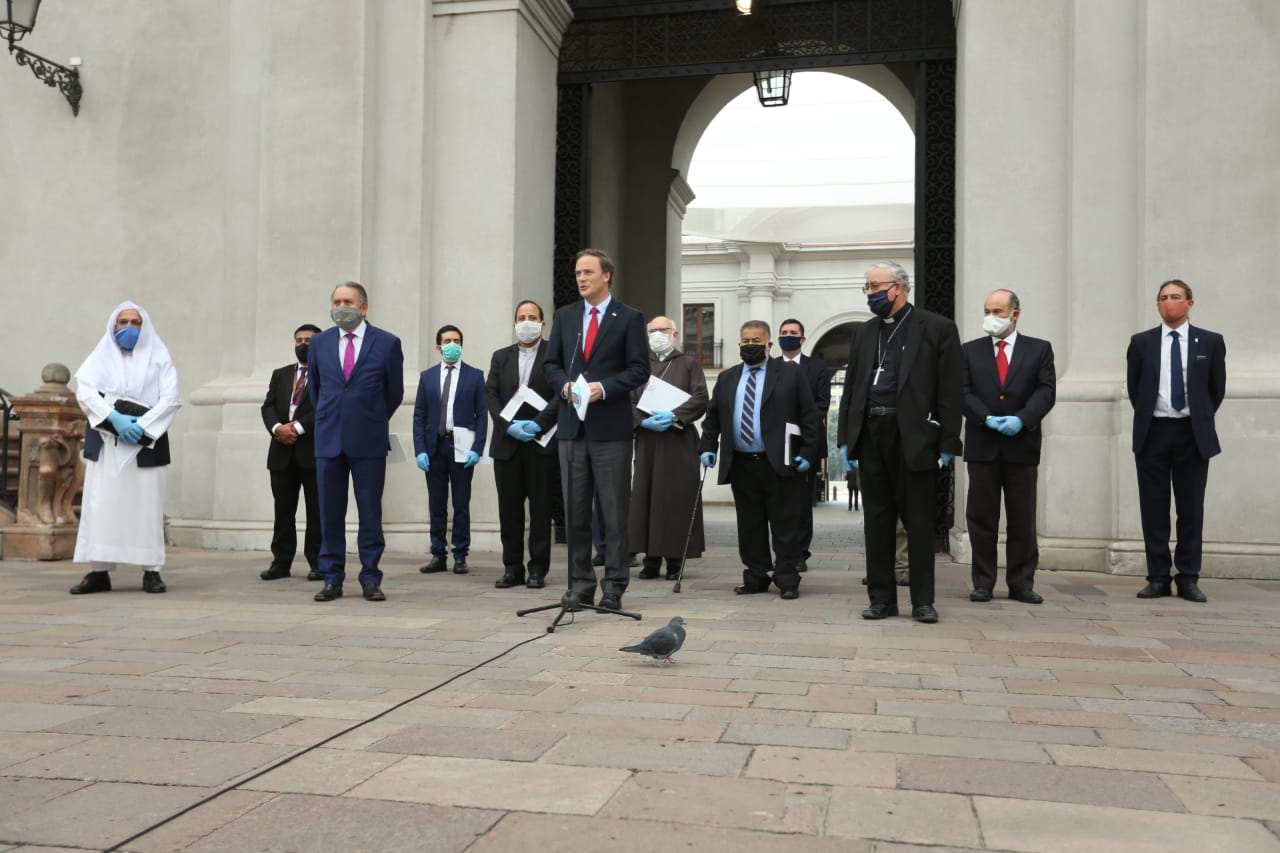 On April 23, 2020, a historic interfaith meeting was held between church and state at the Presidential Palace in Santiago, Chile. A new “Interreligious Table” was created between government leaders and religious leaders to address the COVID-19 emergency. The Secretary General of the Presidency, Felipe Ward, declared during a press conference that “we have formed an interreligious table to fulfill the mandate of the Government, the SEGPRES (General Secretariat of the Ministry of the Presidency) and our office of Religious Affairs, to act as a bridge between the Executive (branch) and the churches.” [1] [2]

There were faith leaders from 7 different religions who met with the Secretary General of the President during the “Interreligious Table.” They met to fight against COVID-19, to show solidarity and promote unity. The church leaders were: 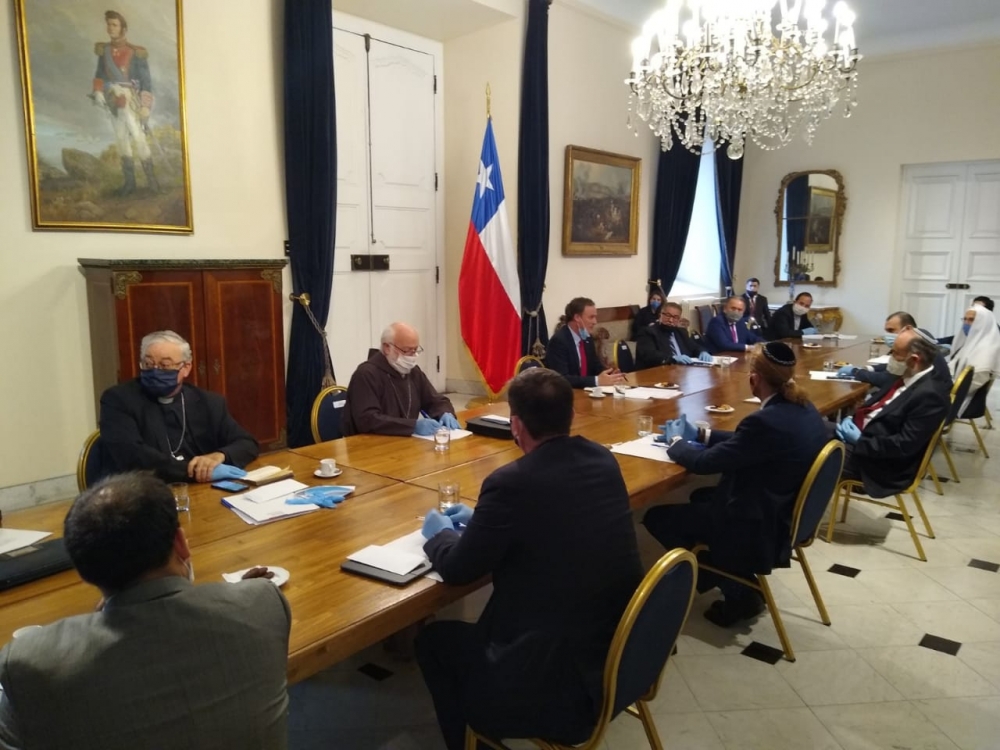 “Total Unity” at the Interreligious Table

The Secretary General of the Presidency, Felipe Ward, also declared that there was “total unity” among the representatives of the different religions to close their churches during the COVID-19 pandemic and not have face-to-face services. [8]

Church unity was also part of the agenda. What does ecumenical unity have to do with COVID-19? We can’t think of any connection; but apparently, in order to be safe from the pandemic, we have to commit to uniting with the other churches. Filipe Ward revealed during his deliberations that there was support from the “top leaders” to “call for unity” and to establish “permanent spaces for dialog.” [8]

Felipe Ward also reports that plans are being prepared for churches to come together “to have a Day of Prayer and Reflection for Chile.” He said a date will quickly be set for this to happen. [8] 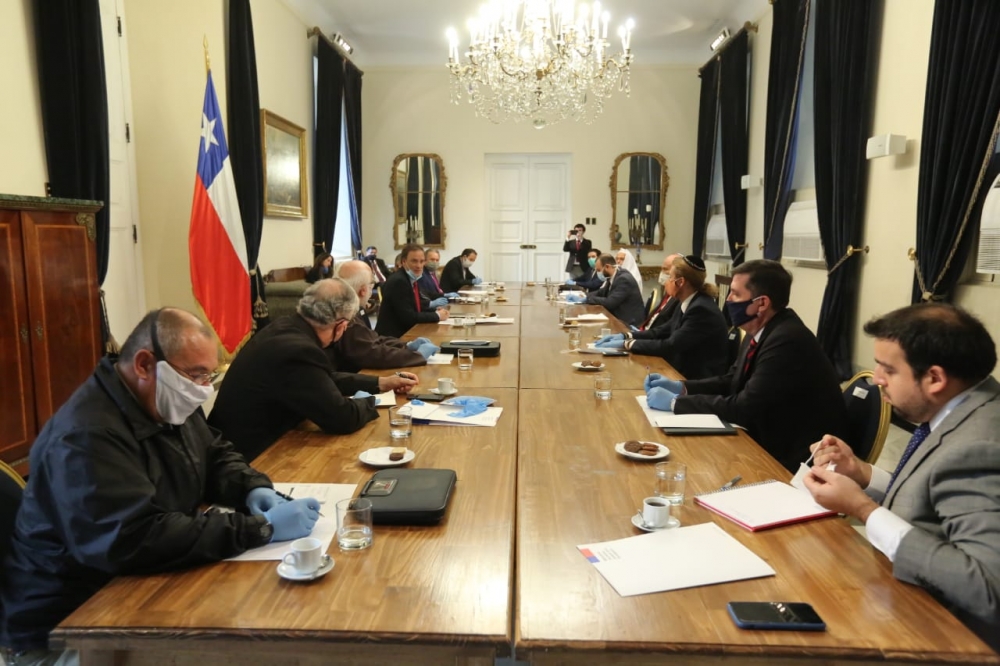 A new religious, social and pluralistic organization has just been created in Chile to help combat COVID-19 and promote interfaith unity. This is the second time within two weeks that we’ve done this. Barely two weeks ago in Venezuela, Seventh-day Adventists formed another strategic alliance with Rome for the same reason. [9] The coronavirus is helping to break down barriers between the churches and is leading us to form an unholy alliance with the state.

What do the Three Angels’ Message really mean to us as a people? Why would we participate in a confederacy between church and state? Why are we engaged in an effort that is determined to establish peace and unity between politicians and churches? This is an amalgamation between the office of the church and the office of the state – religious and political ecumenism. This is being done to strengthen their influence to bring change to society. We have been warned about this:

Prophecy declares that the power of the church would work hand in hand with the state to negotiate peace and religious unity in the last days. Here we see the main leaders of a state working for closer relationships with the church and trying to achieve peace and unity between Catholics and Protestants. Why are Seventh-day Adventist religious liberty leaders involved in this process? 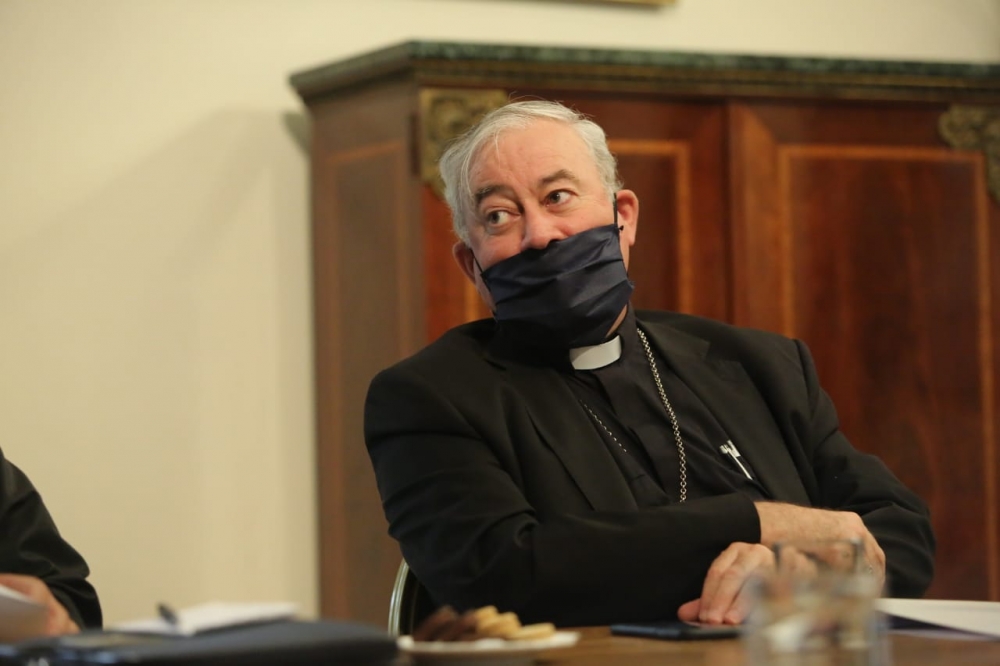 “No Confederacy With Those Opposing the Truth—Let the watchmen on the walls of Zion not join with those who are making of none effect the truth as it is in Christ. Let them not join the confederacy of infidelity, popery, and Protestantism in exalting tradition above Scripture, reason above revelation, and human talent above the divine influence and the vital power of godliness” (Bible Commentary, Vol. 4, pp. 1141, 1142).

“Church and the World in Corrupt Harmony—The Word of God plainly declares that His law is to be scorned, trampled upon, by the world; there will be an extraordinary prevalence of iniquity. The professed Protestant world will form a confederacy with the man of sin, and the church and the world will be in corrupt harmony” (Bible Commentary, Vol. 7, p. 975). 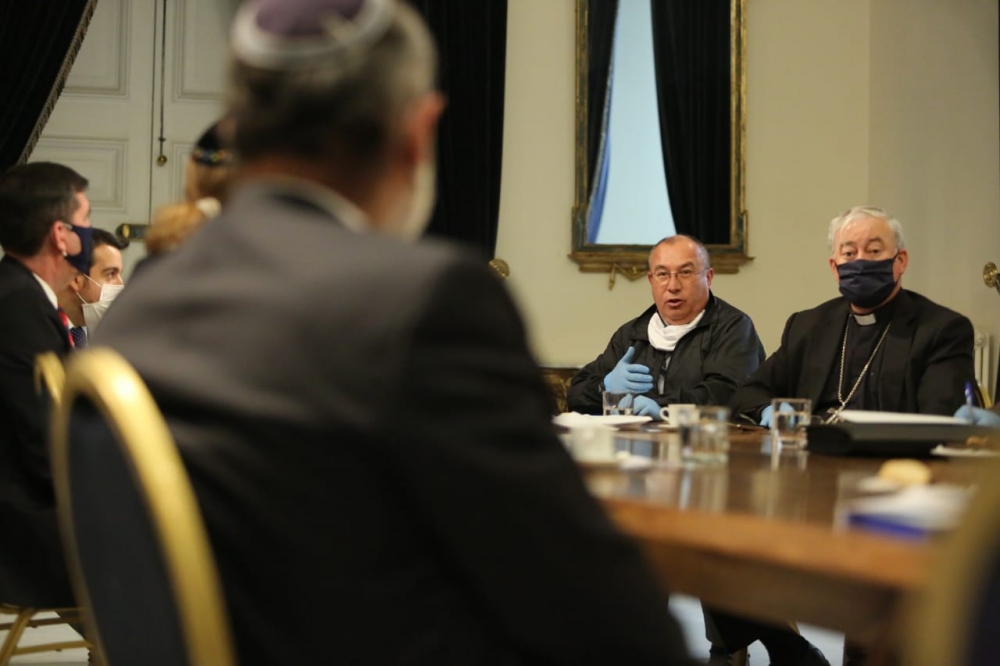 What else can we say? Our leaders are more than happy to cooperate with all of this. What else can we do to show them why this is not part of God’s plan for us? What can be done to change their minds? If the word of God is not enough to open our eyes, what else can we say? Has our conscience been so desensitized to ecumenism that we cannot see a problem with this? All we can do is express the great shame and regret for those who have sold their souls to work with the fallen angels. God says there are hidden participants in all these worldly and ecumenical confederacies:

“Fallen Men and Fallen Angels in Same Confederacy—Through apostasy, fallen men and fallen angels are in the same confederacy, leagued to work against good. They are united in a desperate companionship. Through his evil angels, Satan contrives to form an alliance with professedly pious men, and thus he leavens the church of God … Thus Satan works today through his evil angels. He confederates with men who claim to be in the faith; and those who are trying to carry forward the work of God with fidelity” (Bible Commentary, Vol. 4, p. 1142).

In view of all this, let us determine more than ever to carry the everlasting gospel in context to the Three Angels’ Message to the entire world without hesitation. Let’s unite in this work. Let’s commit to this cause. Let’s be faithful to this calling.