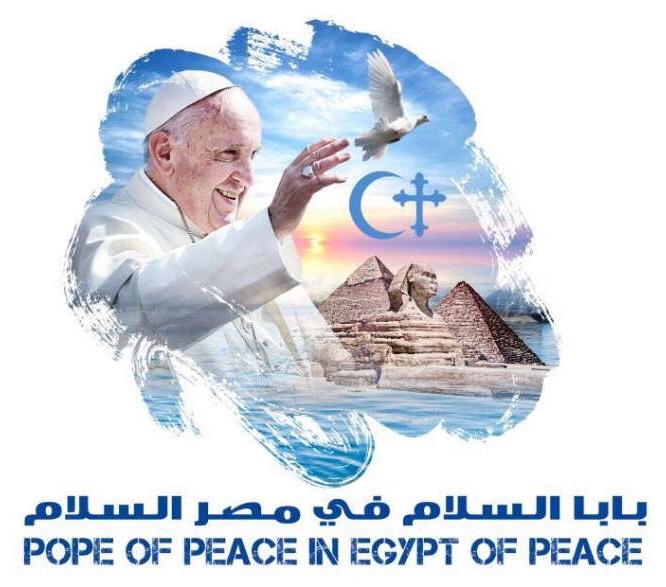 In preparation to Pope Francis’ historic visit to Egypt, the Vatican has rolled out a new logo commemorating the event which takes place April 28-29. The logo shows the Muslim Crescent next to the Christian Cross, which visually places the “religion” of Jesus Christ and the Christian faith on the same level with the teachings of Islam.

The Vatican published the following press release regarding the Pope’s visit to Egypt:

The logo for Pope Francis’ Apostolic Journey to Egypt, which takes place 28-29 April, has been released by the Egyptian Catholic Church.

The three main elements present in the logo are Egypt, Pope Francis, and Peace.

“Pope of Peace in Egypt of Peace” are the words in Arabic and English at the base of the logo.

Egypt is represented by the Nile River – a symbol of life – as well as by the pyramids and the Sphinx, which highlight the long history of civilization in this African country.

The Cross and Crescent Moon at the center of the logo represent the coexistence between the various components of the Egyptian people.

A white dove signifies peace, which is both the highest gift to which every human being can aspire and the greeting of monotheistic religions.

Finally, the dove precedes Pope Francis to announce his arrival as the Pope of Peace in a country of peace.

Regardless of what the logo with its occult symbols represent, one thing is certain – Pope Francis will not be spreading the true gospel of Jesus Christ nor any message of true peace. Pope Francis believes in a multicultural, universalist gospel that teaches that all faiths are different paths to the same God.

Pope Francis has also condemned proselytism, the act of converting people to Christianity. He called the work of trying to get people to change their faith a work of “poison.”

Christians affirm each of these Biblical claims about Jesus, while Islam emphatically rejects them. This is the decisive difference between these two faiths. All the differences stem from the understanding of who Jesus is.

Islam and Christianity clearly are not equal nor do they worship the same God. Pope Francis claims to be the representative of Jesus here on earth and yet he goes around spreading a teaching that is clearly at odds with the gospel of Jesus Christ. This should be deeply concerning to all Christians. How can anyone support the idea that Christians and Muslims are basically worshipping the same God?

Yet this is the message that the “Pope of Peace” wants to promote. In fact Pope Francis denies the very existence of radical Islamic terrorism. How can you offer peace as a solution when you deny the very problem that is engulfing Egypt and the rest of the world?

There is no peace in Egypt, at least not for the Christian population living there. And the blood-thirsty radical Islamists that are blowing up Christian churches in Egypt will not be persuaded to stop with the Pope’s false message of peace. The Bible tells us that false messages of peace will only lead to more terror:

“We looked for peace, and there is no good; and for the time of healing, and behold trouble!” Jeremiah 8:15.

“For they have healed the hurt of the daughter of my people slightly, saying, Peace, peace; when there is no peace.” Jeremiah 8:11.

“For when they shall say, Peace and safety; then sudden destruction cometh upon them, as travail upon a woman with child; and they shall not escape.” 1 Thessalonians 5:3.

The only hope for this world is found in Christ Jesus because He is the Prince of Peace (Isaiah 9:6). But we must accept and obey Him and forsake the wicked works of darkness, murder, hate and violence. It’s not enough to confess Him with our lips, we must accept His clear teachings and apply them in our lives, for this alone will grant us the peace that we need in this time of crisis. There are not many ways to God, and there are not many gospels. There is only one path to peace with God and with our fellowmen, and that’s through Christ Jesus and Christ Jesus alone.

“And the peace of God, which passeth all understanding, shall keep your hearts and minds through Christ Jesus.” Philippians 4:7.