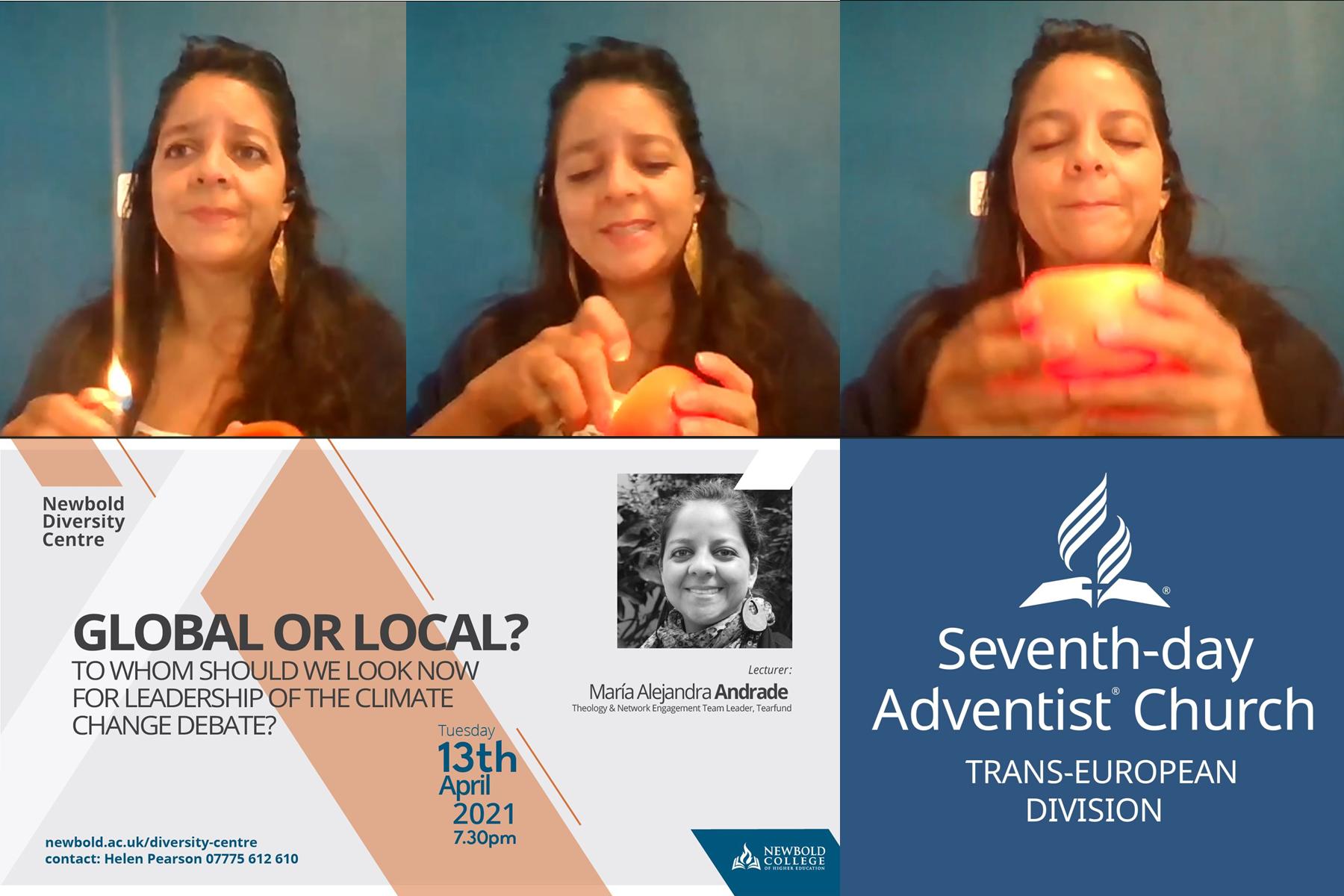 The Trans-European Division of Seventh-day Adventists is promoting a conference that took place on April 13, 2021 at Newbold College of Higher Learning, a Seventh-day Adventist institution in the United Kingdom. The conference dealt with climate change and was led by María Alejandra Andrade Vinueza, a radical evangelical eco-theologian from Ecuador. Who is María Alejandra Andrade Vinueza? She is a promoter of the veneration of Mother Earth, indigenous spirituality, Roman Catholic social teaching, ecological sins and the idea that the divinity of God is both male and female.

In the Facebook post above, the Trans-European Division endorses and promotes Maria Alejandra Andrade Vinueza’s lectures. In the video below, you will see María Alejandra Andrade Vinueza offering the “Franciscan Prayer” in which she explains that Mother Earth is the first theologian to speak to us through the trees, rivers and mountains. In her prayer, she asks for God’s blessing, who, according to her, “is both mother and father.”

This type of Eastern pantheism is opening the door to demonic activity. They are mixing pagan spirituality with Christianity. The Omega of Apostasy is making its way into Adventism through Mother Earth philosophies. Pagan “Christian” theologians from Babylon are teaching spiritualism in our institutions. And this is being promoted by an entire division within Adventism. Why can’t our people see the danger with this? Mother Earth spiritualism under the cloak of environmentalism is causing our people to “seek them with familiar spirits” (Isaiah 8:19, 20). Our unwillingness to love and embrace the truths of our historic faith is causing us to embrace “strong delusions” and “lies” (2 Thessalonians 2:10, 11).

Minute 40:16 – “So how can we defend Mother Earth with body, with blood and with life? And who is doing that? I want to say that, just a quick note; I speak intentionally when I say ‘Mother Earth.’ I will quote one big eco-theologian in Latin America, his name is Leonardo Buff. He was speaking at the big event in the United Nations in 2008 and he was defending why to talk about the earth as a ‘Mother.’ He said, ‘One can dig the earth, one can sell the earth, one can buy the earth because it is the earth. But we cannot do the same with the Mother. The Mother cannot be sold and bought. The Mother is to care for. The Mother is to love for. The Mother is to venerate. We need to have that same attitude with Mother Earth because it is the only one that we have.’ So although in some of our Christians spaces calling Mother Earth can be very disruptive and problematic, actually putting the label ‘Mother’ before earth will at least give us a more respect to the land we are walking in. 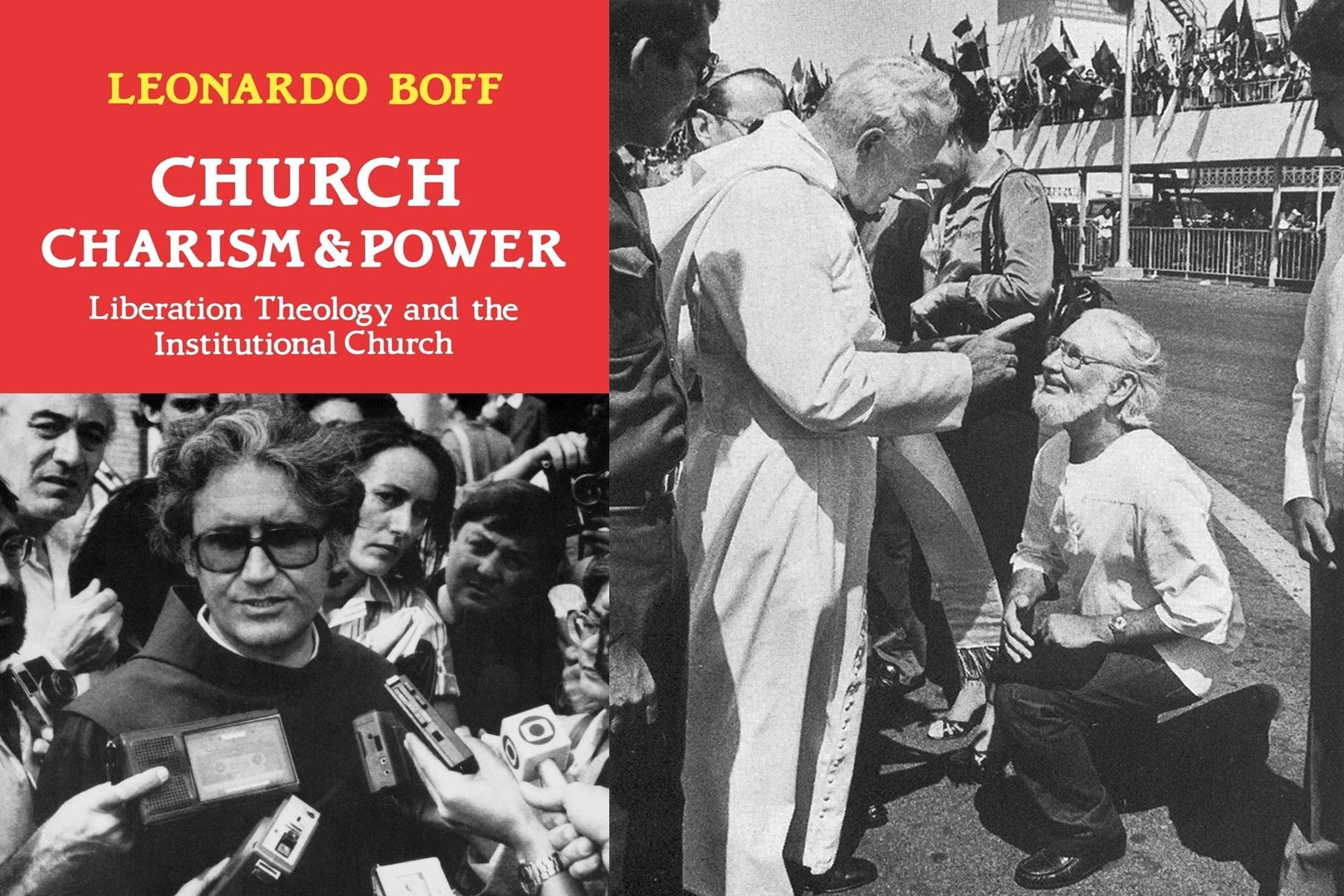 The Roman Catholic Priest Leonardo Boff is promoted in the lectures to Seventh-day Adventists. Here is Leonardo Boff dressed as a catholic monk on the cover of his book, left; and here he is kneeling before Pope John Paul II, right.

Minute 49:46 – They (indigenous communities) believe that the forest is a living being with a consciousness and awareness, and it is made up of all the beings of the jungle, from the smallest of the beast, to the largest and supreme … It includes the beings of the animals, the plants, the minerals but also the spiritual and cosmic worlds which communicate with human beings what is necessary to revitalize the physiological, physical and spiritual well being … they believe that the forest is alive. It is a living being.

Hour 1:03:11 – As a Christians we also need to understand that sin and salvation are not only individual. They are partly individual, but they are also communitarian. There is something that Latin American theologians have called systemic sins or structural sins or social sins which refer to all those systems that actually promote death and not the kingdom. So climate change and environmental destruction is part of that system of sins that needs to be challenged and needs to be denounced and needs to be corrected.

Hour 1:06:13 – I believe that we need to learn from indigenous communities as I shared in the beginning, I am learning about my own indigenous heritage and ancestral heritage because I believe there is so much richness in the way that indigenous communities conceive the world and conceive life that can give us a light now that we are trying to look for alternatives and other ways of living that can help us to fight against climate change. 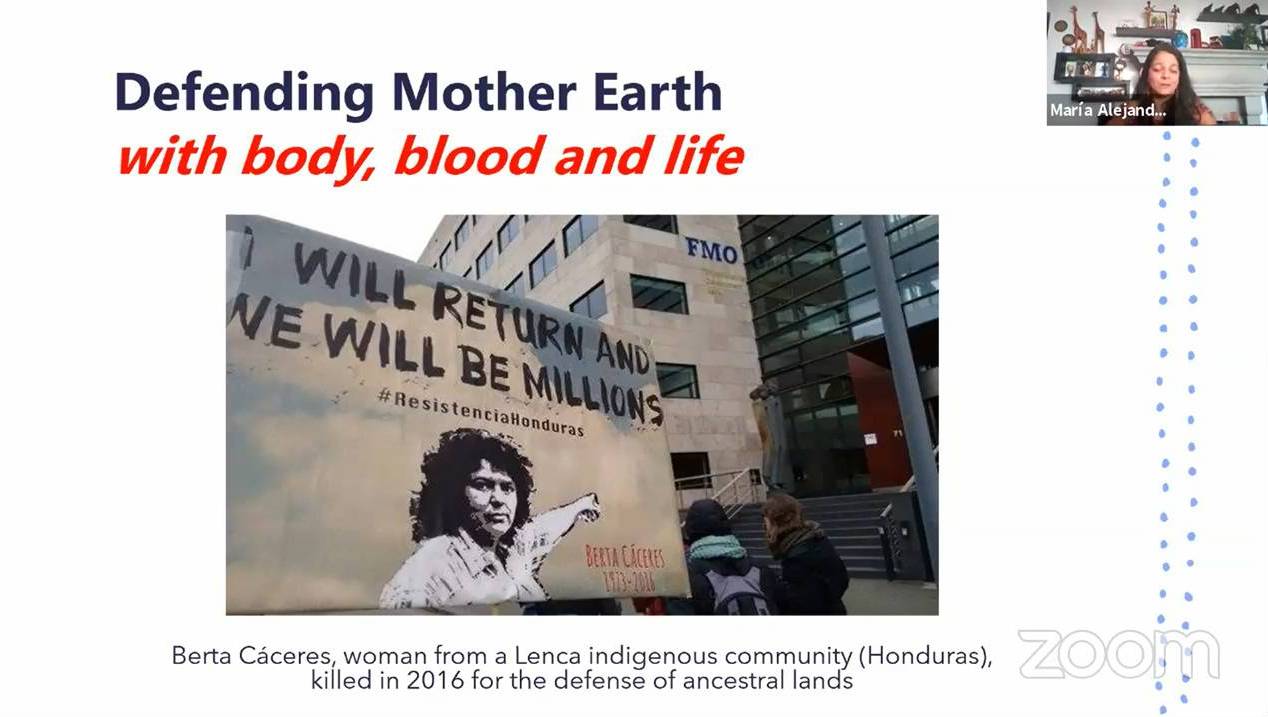 “Defending Mother Earth  with body, blood and life.” This is an actual PowerPoint slide from the presentation given by Maria Alejandra Andrade Vinueza at Newbold College, the same lecture being promoted by the Trans-European Division. [1]

This was part of the message that was being pushed upon Seventh-day Adventists at Newbold College of Higher Learning and promoted by the Trans-European Division. This is a revival of pantheism under the covering of combating climate change. This is an attempt to “transform” our institutions. They are teaching that nature is equal to God and the earth must be venerated. This is a resurrection of the same deadly heresy that Ellen White warned would come again among our people (See Selected Messages, Book 1, p. 200).

We are being indoctrinated with pure paganism. An entire division within the Seventh-day Adventist Church is trying to convert our people into earth worshippers, just like the indigenous people of the Amazon. This is promoting mysticism, spiritualism, ecumenism and eco-revolution. It’s idolatry. 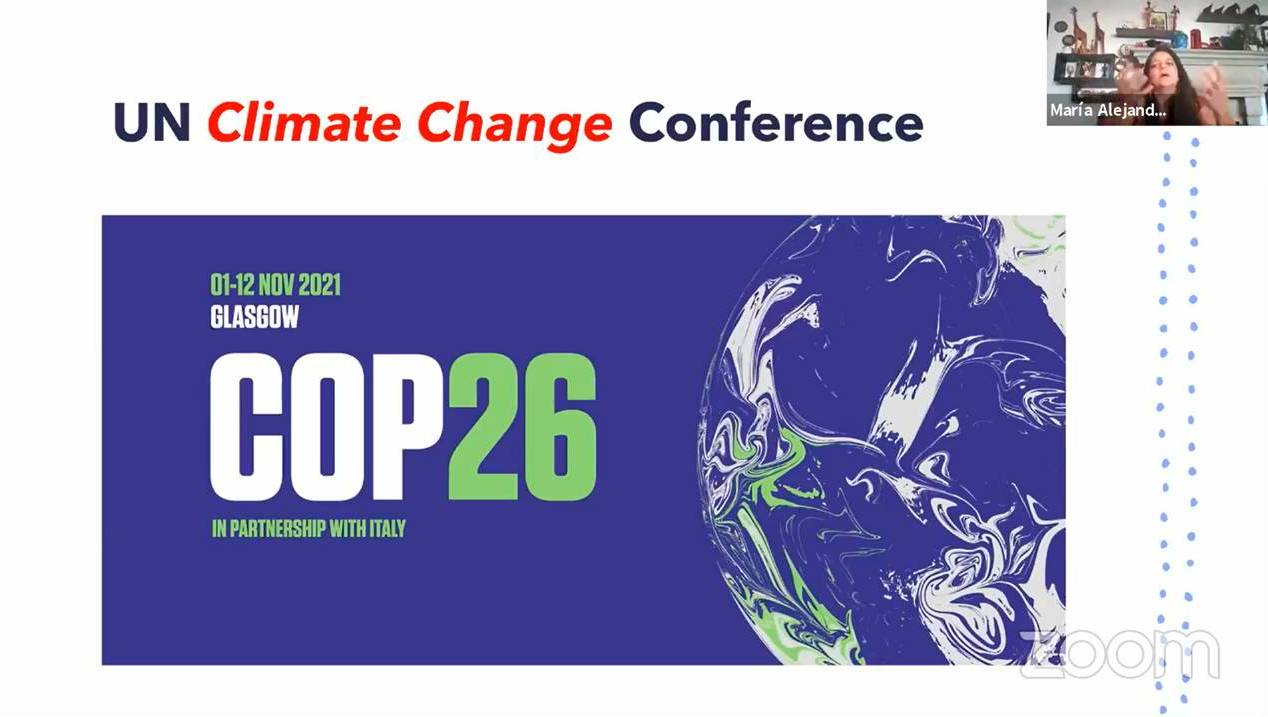 Not only was pantheism being embraced and celebrated at this event, but we also see a union of the Babylonian family by evangelical lecturers pushing Roman Catholic theology with calls to embrace spiritualism:

“Satan determines to unite them in one body, and thus strengthen his cause by sweeping all into the ranks of Spiritualism. Papists, who boast of miracles as a certain sign of the true church, will be readily deceived by this wonder-working power; and Protestants, having cast away the shield of truth, will also be deluded. Papists, Protestants, and worldlings will alike accept the form of godliness without the power, and they will see in this union a grand movement for the conversion of the world, and the ushering in of the long-expected millennium.” (Great Controversy, p. 588).

Spiritualism will be the means that will unite all of the churches into one body. By embracing spiritualism they reject the true God and His true gospel. As men and women reject biblical truth they will believe in anything – including green spirituality, climate religion, Mother Earth and nature worship. 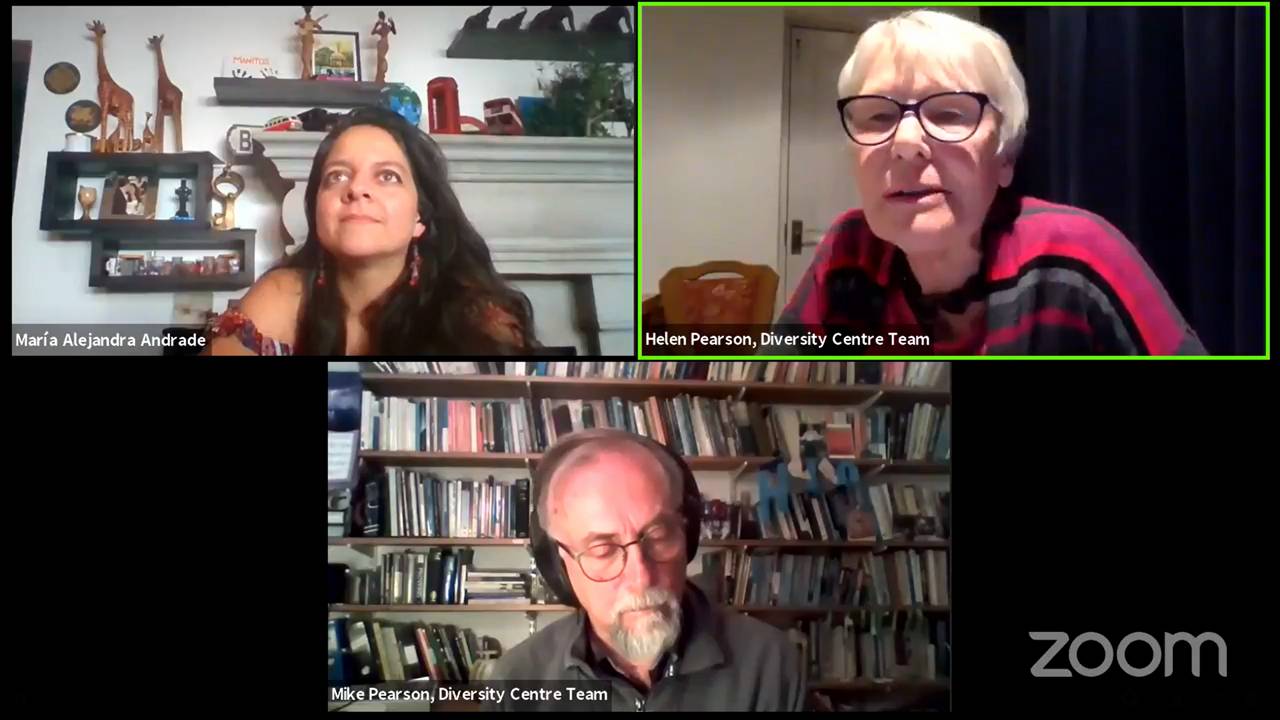 We are rapidly becoming a people who are losing our unique identity. We are fast becoming just another church among hundreds and thousands of religions in the world. Ecumenism, pantheism, interfaith relationships and spiritualism are the modern-day “Apostasy at the Jordan River” experience that is described in Leviticus 25:

“And Israel abode in Shittim, and the people began to commit whoredom with the daughters of Moab. And they called the people unto the sacrifices of their gods: and the people did eat, and bowed down to their gods. And Israel joined himself unto Baal-peor: and the anger of the LORD was kindled against Israel” Numbers 25:1-3.

God’s answer to paganism and spiritualism is found in the great three-fold messages of Revelation 14:6-12. But instead of converting the world with God’s last-day message, it is the world that is converting us. A rejection of divine revelation leads to relativism, and relativism is leading the world to pantheism and spiritualism. Biblical faith and truth are being eliminated. God’s word is no longer the way to salvation. Biblical truth has become nothing more than wishful thinking. What’s left? Paganism, nature worship and Sunday laws. This is always the result when biblical truth is rejected:

“Spiritualism is about to take the world captive … Superhuman power is working in a variety of ways, and few have any idea as to what will be the manifestations of spiritualism in the future … The signs and wonders of spiritualism will become more and more pronounced as the professed Christian world rejects the plainly revealed truth of the Word of God, and refuse to be guided by a plain ‘Thus saith the Lord,’ accepting instead the doctrines and the commandments of men.” (Manuscript, 92, 1894).

And what are the consequences when entities, institutions or church divisions openly promote pantheism? Nothing. There are none. Unfortunately, all attention will be diverted to those who are pointing this out, rather than to those who are bringing spiritualism into Adventism. Those who are trying to defend our historical teachings will be denounced, while those who are destroying our faith will be able to continue as usual. Welcome to the Omega of Apostasy!