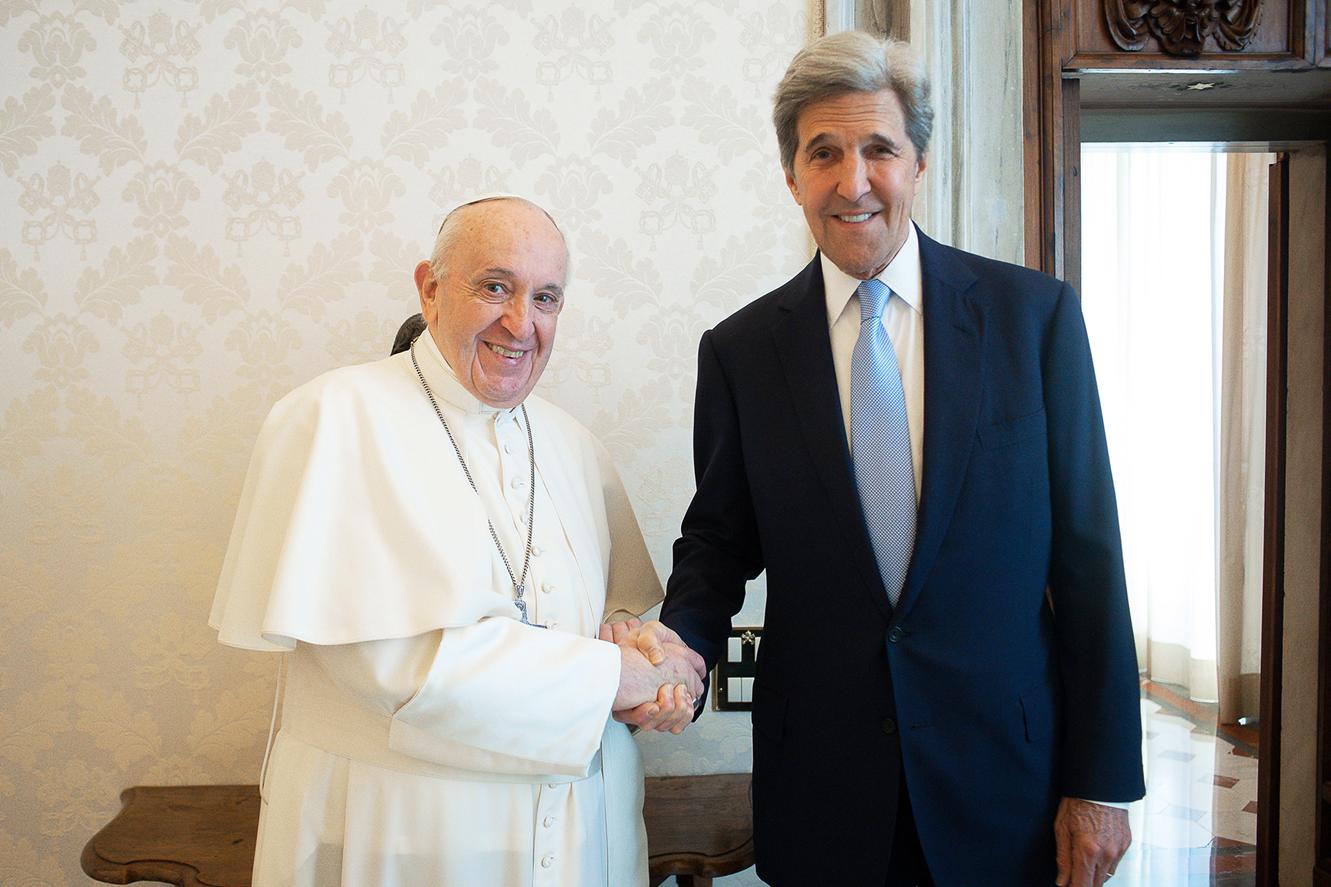 Pope Francis met with U.S. President Joe Biden’s climate envoy John Kerry on Saturday May 15, 2021 at the Vatican. John Kerry is the United States Special Presidential Envoy for Climate and a member of the United States National Security Council. He has authority over energy and climate policy within the executive branch of the Biden administration. After the meeting with Pope Francis, John Kerry said the following about Laudato Si’, the Pope’s encyclical, in an interview with Vatican News:

“His encyclical Laudato Si’ is really a very, very powerful document, eloquent and morally very persuasive. And I think that his voice will be a very important voice leading up to and through the Glasgow conference, which I believe he intends to attend. So, we need everybody in this fight. All the leaders of the world need to come together and every country needs to do its part. And I think, I think his Holiness speaks with a moral authority that is quite separate. It’s unique and we need all the power we can bring to the table.” [1]

Here we see the Biden administration presenting its vision for the world – Laudato Si’. The current White House has sent its Minister on Climate to praise the Pope’s encyclical and to focus on this document as the solution to our so-called climate crisis. The agenda for fixing our energy and climate crisis is found, according to the United States and the Vatican, within Laudato Si’. John Kerry is also calling on world leaders to take up this challenge and “do” their “part.”

Section #237. On Sunday, our participation in the Eucharist has special importance. Sunday, like the Jewish Sabbath, is meant to be a day which heals our relationships with God, with ourselves, with others and with the world. Sunday is the day of the Resurrection, the “first day” of the new creation, whose first fruits are the Lord’s risen humanity, the pledge of the final transfiguration of all created reality. It also proclaims “man’s eternal rest in God”. In this way, Christian spirituality incorporates the value of relaxation and festivity. [2]

Section #179. Because the enforcement of laws is at times inadequate due to corruption, public pressure has to be exerted in order to bring about decisive political action. Society, through non-governmental organizations and intermediate groups, must put pressure on governments to develop more rigorous regulations, procedures and controls. Unless citizens control political power – national, regional and municipal – it will not be possible to control damage to the environment. Local legislation can be more effective, too, if agreements exist between neighbouring communities to support the same environmental policies. [2] 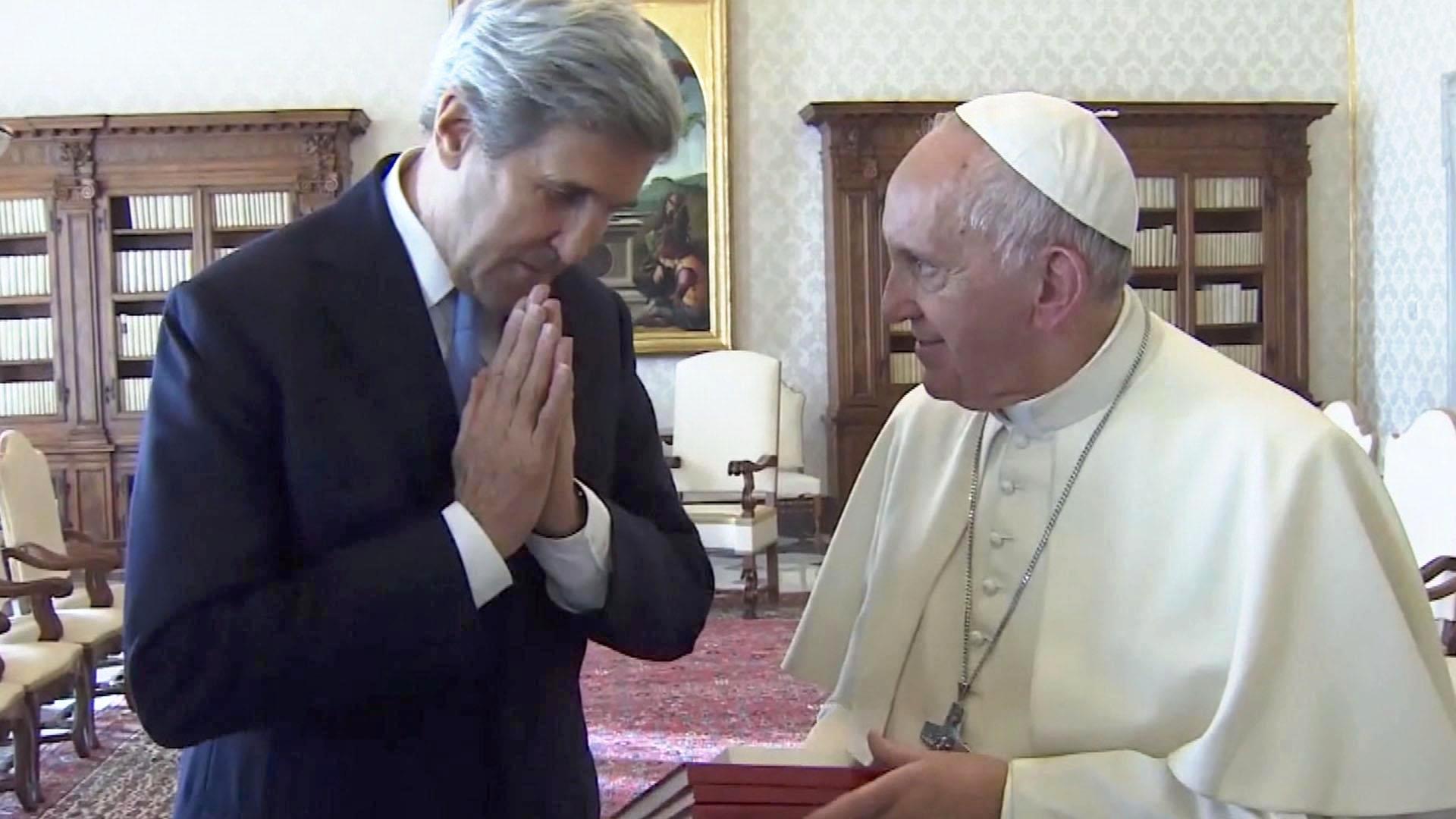 This is exactly what we were warned about through inspiration:

The Joe Biden administration has embraced the policies championed by Pope Francis. Together with Rome, our nation is calling upon other governments and states to adopt Rome’s climate change policies. Sunday, the false Sabbath and the mark of apostasy, is being disguised as the only solution to save our society from destruction. All this continued agitation for Laudato Si’ is Rome’s master plan to conceal its true intention of establishing its ecclesiastical supremacy throughout the world by dominating both church and state.

The Joe Biden administration and Pope Francis’ pontificate are creating an unholy alliance that will propel the world towards the Great Reset. A new morality has been created. It’s no longer about the 10 Commandments. It’s about climate change, open borders, mass migration, universal income, wealth redistribution, ending capitalism and Sunday sacredness (Laudato Si’). Instead of sharing what God says about salvation and sin, religious and political leaders are trying to reshape our world politically with Marxism (Fratelli Tutti).

Prophecy declares that such a framework will be used to implement the mark of the beast. There will be a movement to establish Sunday observance by law (Laudato Si’). We have known for years that such a movement was coming:

“And all that dwell upon the earth shall worship him, whose names are not written in the book of life of the Lamb slain from the foundation of the world.” Revelation 13:8.

The above verses describe a religious requirement imposed by the state. The seed of this development is present in this new unholy alliance between the Vatican and the United States. And although the whole world may be in favor of this cooperation, God is against it. The beast power of Revelation 13 will eventually pronounce a death penalty on those who refuse to worship the beast and receive his mark, but God will pronounce the penalty of everlasting death upon those who do (Revelation 14:9).

“Sooner or later Sunday laws will be passed. But there is much for God’s servants to do to warn the people. This work has been greatly retarded by their having to wait and stand against the devisings of Satan, which have been striving to find a place in our work. We are years behind” (Review and Herald, February 16, 1905).

Before the final movements are permitted to take place, God’s people will have a great work to do upon the earth.  There must be at this time a renewal and a revival of the preaching of the Third Angel’s Message like never before. We must reject the ecumenical movement’s call to soften down God’s last message of mercy. We must reject this attitude of utter silence and complacency with regards to the movements of the papacy. The world must be warned!

It is during this time that the Third Angel’s Message is supposed to gain power and strength. These events will stir God’s people into action and they will raise the standard of truth – the commandments of God and the faith of Jesus (Revelation 14:12). The final warning message will be proclaimed to the world through pen and voice and through the lives and testimonies of a peculiar people who have been set apart for this work.