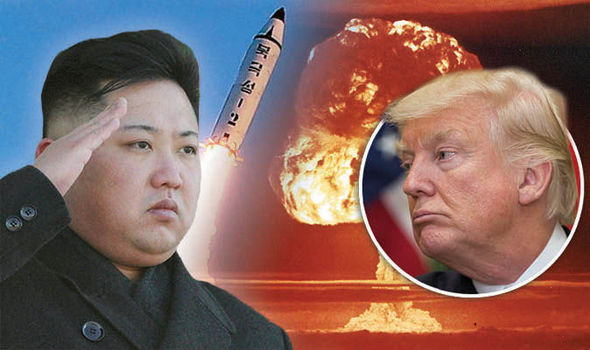 As our world draws nearer to a nuclear apocalypse we often wonder where is God and what is He doing in the midst of this? We are told in Scripture that God is sovereign and that ultimately His will is being done on “earth as it is in heaven.” (Matthew 6:10).

“Blessed be the name of God for ever and ever: for wisdom and might are his: And he changeth the times and the seasons: he removeth kings, and setteth up kings.” Daniel 2:20, 21.

So regardless what North Korea’s Kim Jong Un says, no matter what China’s president or Russia’s president threaten or what President Donald Trump may warn, human beings are not calling the shots and they are not in control of this world.

“He (God) doeth according to his will in the army of heaven, and among the inhabitants of the earth: and none can stay his hand, or say unto him, What doest thou?” Daniel 4:35.

We cannot believe that the Creator God has forsaken the earth or is disinterested in what is taking place right now. He does care because He is still the God of everyone, even those who do not acknowledge Him.

Yes He is the God of the Chinese, the Russians, the Americans and even of the North Koreans. He is the God of all flesh and He has commanded that everyone show mercy and compassion and to help those who are oppressed. He commands that no man plan evil against another.

“Thus speaketh the LORD of hosts, saying, Execute true judgment, and shew mercy and compassions every man to his brother: And oppress not the widow, nor the fatherless, the stranger, nor the poor; and let none of you imagine evil against his brother in your heart.” Zachariah 7:9, 10.

Every single human being is ultimately a child of God. We are to look after the weak and the needy. This is a command! But because men have forsaken God’s words and His authority refusing to acknowledge Him or His laws – the Lord has promised that He will arise in His fury to punish the transgressors.

“But they refused to hearken, and pulled away the shoulder, and stopped their ears, that they should not hear. Yea, they made their hearts as an adamant stone, lest they should hear the law, and the words which the LORD of hosts hath sent in his spirit by the former prophets: therefore came a great wrath from the LORD of hosts.” Zachariah 7:11, 12.

Sadly, this world has despised the commandments of the Lord. We have selfish and harsh dictators who are oppressing the weak and the poor. All of this is an outrage to God, and He is going to send great wrath! Terrible punishment is coming because of man’s terrible treatment of their fellow man and for open disregard to the word of God. And if men refuse to hear God’s call for peace, mercy, compassion and justice – God will not hear our calls for help when His judgments are in the land.

“Therefore it is come to pass, that as he cried, and they would not hear; so they cried, and I would not hear, saith the LORD of hosts: But I scattered them with a whirlwind among all the nations whom they knew not. Thus the land was desolate after them, that no man passed through nor returned: for they laid the pleasant land desolate.” Zachariah 7:13, 14.

The good news is that God will bring in judgment and establish perfect justice. He will set up a kingdom built on righteousness, justice, peace and love. This is the future for His people. Look at the glorious prospect: