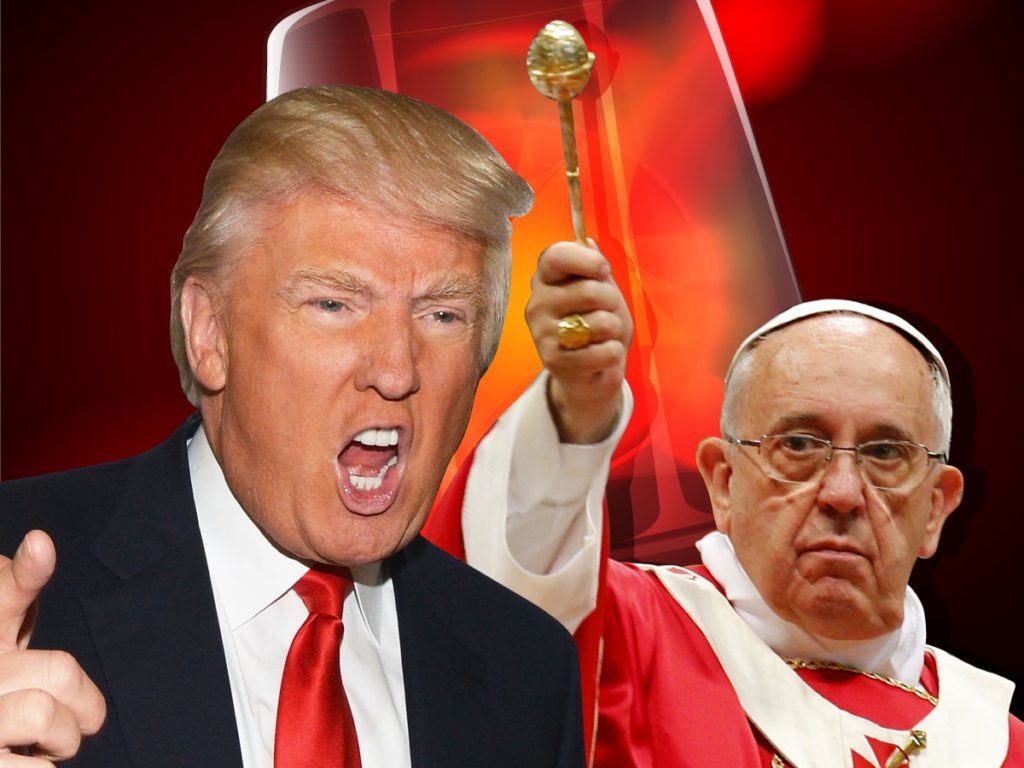 Last year Pope Francis attacked Donald Trump’s plan to build a wall on the border with Mexico. He stated that those who build walls instead of bridges are not “Christian.”

Donald Trump responded by saying that the Pope’s words were “disgraceful.” He went on to state that no religious leader, including the Pope, has the right to question another man’s faith and then accused the Pope of being political “pawn” for those advocating open borders.

There isn’t any politician today who would dare refer to the Pope’s statements as “disgraceful” or even refer to him as a “pawn.”

Many believed that Trump’s political career was over after exchanging punches with the Pope. And even though Pope Francis started the argument, you’re not suppose to attack the Pope and get into an fight with him about Christianity and hope to have a long fruitful political career.

Amazingly, Trump survived this episode with the Pope. He also survived and beat the Republican opposition, the constant media attacks, the DNC and Hillary Clinton. He even survived the fights with the intelligence community (CIA and FBI), fights with Hollywood and even conflicts with the EU, NATO and the UN. Now that Trump will take over the Presidency, will his relationship with the Pope improve?

One thing is certain, even though Pope Francis and Donald Trump seem to be at odds with each others’ policies, prophecy will come to pass. What we see in the book of Revelation is a very close working relationship between these last two great superpowers of prophecy – the USA and the Vatican.

The USA will be in a position of “power” to cause not just this nation but the whole world to honor the first beast, the Papacy, by enforcing the mark of the beast. A weak nation, both politically and economically cannot bring this scene to pass. Only a strong, powerful nation can fulfill this prophetic role and Trump has expressed that this is his ultimate objective – making America powerful again.

Secondly, the Vatican, the world’s most influential religion, will also play a part in prophecy when it says that all “the earth and them which dwell therein to worship the first beast (Rome) whose deadly wound was healed.” Revelation 13:12.

This is what we see happening. All the world – politicians, religious leaders and business leaders are joining with Rome and this is certainly healing her deadly wound. The only piece of the puzzle that has yet to take shape is for Donald Trump and Pope Francis to come together into a close-working relationship for the implementation of this world-wide prophetic agenda.

God help us should these two get together to work on advancing their prophetic roles. There hasn’t been any word coming from the Vatican since last year with regards to Trump. And Trump has been quiet with regards to the Pope, at least publically. We hear nothing but silence. Let us welcome this silence, even if it’s only temporary, and work while we can to spread the everlasting gospel of Revelation 14 before it’s too late.

“The work which the church has failed to do in a time of peace and prosperity, she will have to do in a terrible crisis, under most discouraging, forbidding circumstances.” (Evangelism, 31).