On January 8, 2020, Pope Francis allowed a very immoral clown performance by the “Aqua Circus” in his General Audience in the Paul VI Hall at the Vatican. Rome is embracing and promoting paganism, vulgarity, and sensuality and merging these elements with Christianity. You cannot mix the sacred with the secular. You cannot mix Christianity with the common. That is called religious syncretism – the blending of “aqua” paganism and Christianity into one. 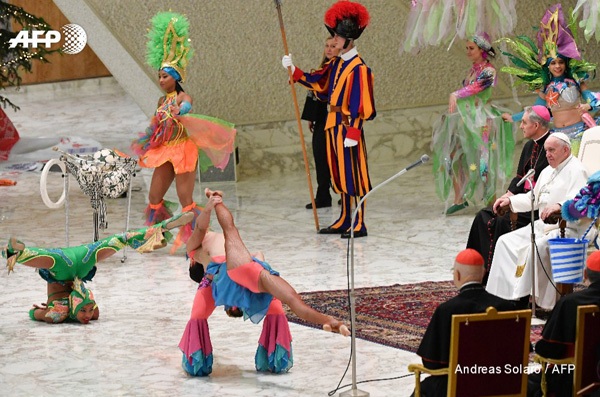 The god of paganism is being worshipped in these bold sensual contortions of the body and profane dances. Our bodies are the temple of the Holy Spirit and we are to use our bodies to glorify God, not promote the lusts of the flesh. (1 Corinthians 6:19, 20). The costumes worn by the women leave little to the imagination. How does immodesty and indecency help further the gospel of Christ? Why is this “circus of fleshly immorality” being portrayed inside the so-called headquarters of Rome? This is not just lustful entertainment; this is an abomination in the eyes of God.

They are not trying hide anything in their freak show. The question is why would Christians combine two separate, opposing cultures into one? The gospel of Christ doesn’t attempt to do this at all. A new gospel is created and a new emerging culture begins. This results in the creation of a mutant gospel that’s been morphed with the elements of a licentious clown show.

“Therefore if any man be in Christ, he is a new creature: old things are passed away; behold, all things are become new.” 2 Corinthians 5:17.

When we come to Christ the old cultures are passed away and we become new creatures with new desires, new feelings, new attitudes and new purposes with a new heavenly culture that’s based on purity and holiness. All things become new while all the old things pass away. We don’t mix the old with the new.

Many churches in their efforts to reach the young people have blended their worship services with cool, carnival atmosphere and night club music. [1] Instead of preaching the biblical truths of Scripture they bring in clowns, motivational speakers, storytellers and comedians to entertain their visitors. Many of these churches have become largely devoid of the gospel, and they do this purposely in an effort to appear relevant for the younger generation. This is syncretism! 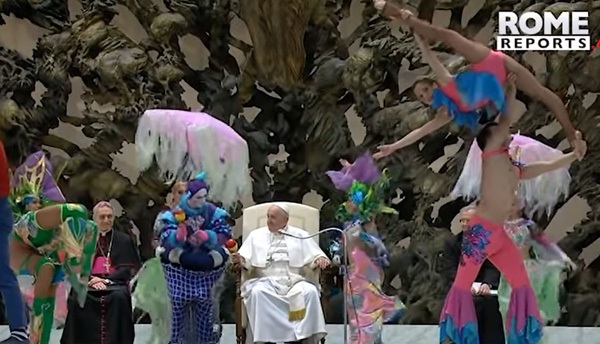 The Christian faith is being sold out to clowns and licentiousness. These false bishops and leaders in the Vatican are mocking Christ and His gospel. Whenever anything is added or taken away from the gospel of Christ, the uniqueness and purity of truth becomes corrupted. A new gospel is created which is no gospel at all.

“I marvel that ye are so soon removed from him that called you into the grace of Christ unto another gospel: Which is not another; but there be some that trouble you, and would pervert the gospel of Christ. But though we, or an angel from heaven, preach any other gospel unto you than that which we have preached unto you, let him be accursed.” Galatians 1:6-8. 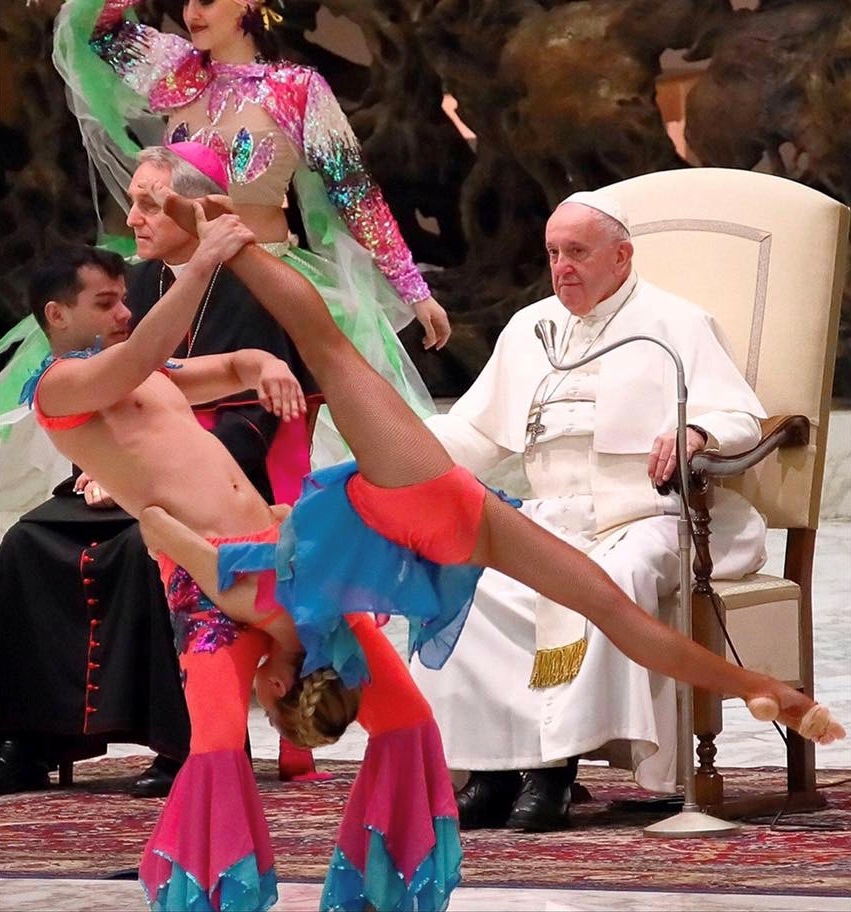 God reveals to us how paganism first came into the church at the time of Constantine. We are seeing a fulfillment of this apostasy taking place on a global scale, and this is affecting every church:

“The great adversary now endeavored to gain by artifice what he had failed to secure by force. Persecution ceased, and in its stead were substituted the dangerous allurements of temporal prosperity and worldly honor. Idolaters were led to receive a part of the Christian faith, while they rejected other essential truths. They professed to accept Jesus as the Son of God and to believe in His death and resurrection, but they had no conviction of sin and felt no need of repentance or change of heart. With some concessions on their part they proposed that Christians should make concessions, that all might unite on the platform of belief in Christ” (Great Controversy, p. 42).

“Now the church was in fearful peril. Prison, torture, fire, and sword were blessings in comparison with this. Some of the Christians stood firm, declaring that they could make no compromise. Others were in favor of yielding or modifying some features of their faith and uniting with those who had accepted a part of Christianity, urging that this might be the means of their full conversion. That was a time of deep anguish to the faithful followers of Christ. Under a cloak of pretended Christianity, Satan was insinuating himself into the church, to corrupt their faith and turn their minds from the word of truth” (Ibid. p. 42).

“Most of the Christians at last consented to lower their standard, and a union was formed between Christianity and paganism. Although the worshipers of idols professed to be converted, and united with the church, they still clung to their idolatry, only changing the objects of their worship to images of Jesus, and even of Mary and the saints. The foul leaven of idolatry, thus brought into the church, continued its baleful work. Unsound doctrines, superstitious rites, and idolatrous ceremonies were incorporated into her faith and worship. As the followers of Christ united with idolaters, the Christian religion became corrupted, and the church lost her purity and power. There were some, however, who were not misled by these delusions. They still maintained their fidelity to the Author of truth and worshiped God alone” (Ibid. p. 43).

“The nominal conversion of Constantine, in the early part of the fourth century, caused great rejoicing; and the world, cloaked with a form of righteousness, walked into the church. Now the work of corruption rapidly progressed. Paganism, while appearing to be vanquished, became the conqueror. Her spirit controlled the church. Her doctrines, ceremonies, and superstitions were incorporated into the faith and worship of the professed followers of Christ” (Ibid. p. 49).

This carnival show is sick, disgusting, repulsive and disrespectful. This is the church built by clowns not by Christ. Tragically, this is not an isolated display of paganism by the Vatican today. [2] [3] [4] Rome has a long history of attempting to blend the carnival worship of paganism with Christianity just as Constantine mixed the pagan worship of the sun-god, Mithra, with Christianity. [5] 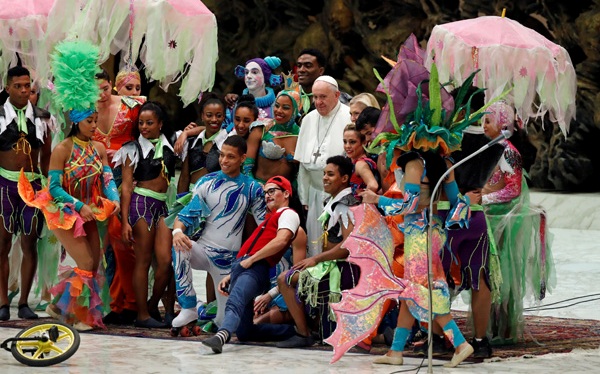 “And I heard another voice from heaven, saying, Come out of her, my people, that ye be not partakers of her sins, and that ye receive not of her plagues. For her sins have reached unto heaven, and God hath remembered her iniquities.” Revelation 18:4, 5.