Is the Seventh-day Adventist faith not enough to satisfy your soul? Well, just chant Roman Catholic songs written for the traditional Latin mass. In the above video, Ganoune Diop, a top senior executive who works at the General Conference, is leading the way for us to sing in Latin during Roman Catholic liturgical celebrations. 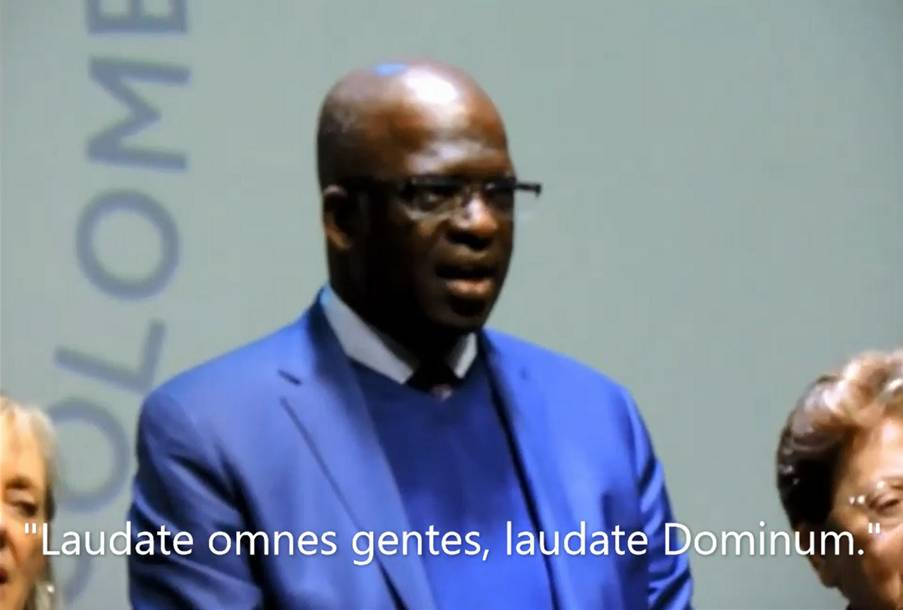 Thanks to the ecumenical movement, worship has become relative today. It means whatever you want it to mean. Catholic rituals are now being embraced during the worship to our Creator by some. But is this something God will accept, and what has He said about this?

“Woe unto them! for they have gone in the way of Cain, and ran greedily after the error of Balaam for reward, and perished in the gainsaying of Core (Korah).” Jude 1:11.

“It is a backsliding church that lessens the distance between itself and the papacy” (Signs of the Times, Feb. 19, 1894). 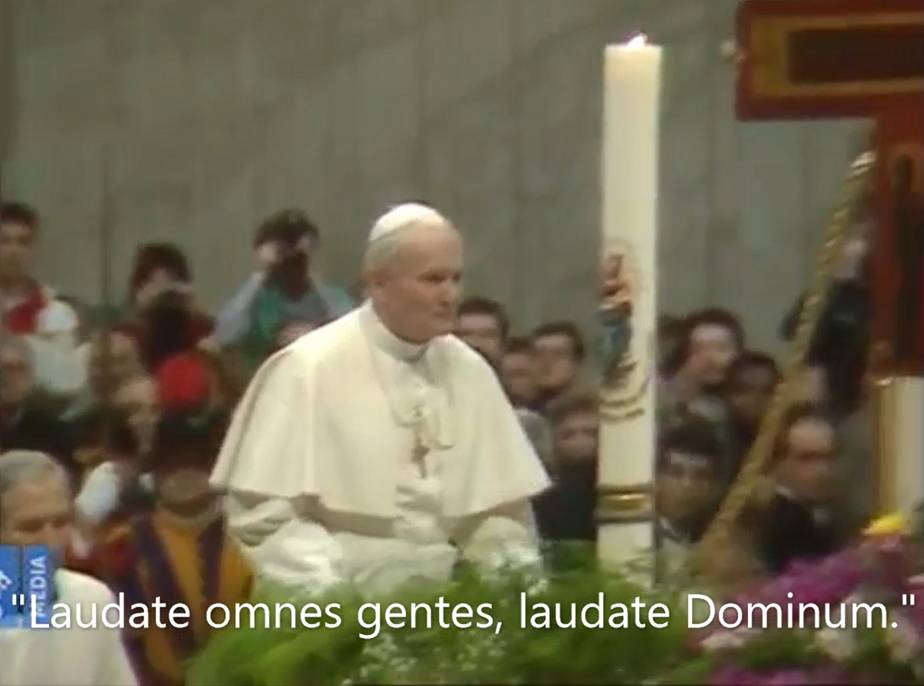 Catholics at the Vatican sing “Laudate Omnes Gentes” to the Pope (see video below).

Ganoune Diop is actually singing the famous song called “Laudate Omnes Gentes” which is an old traditional, Roman Catholic, Latin Mass song used by Rome. [1] The song is used as a chant and the words are repeated over and over again.

Ganoune Diop was singing this song in Latin during an interfaith event that included Roman Catholics and Evangelicals. Latin is the official liturgical language of Rome and it has been used by its priests to perform mass for centuries. 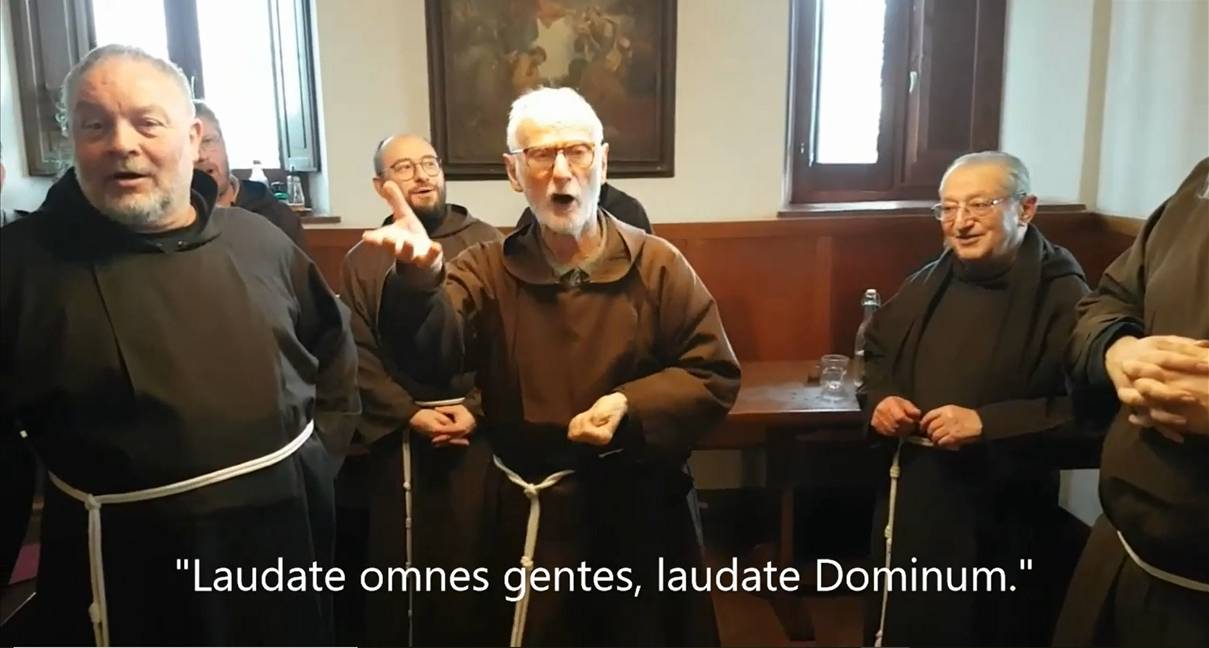 Up until the 1960s all Catholic priests used what is called the Tridentine Mass, also known as the Traditional Latin Mass. The word Tridentine is Latin for the Council of “Trent.” The council of Trent condemned the Protestant Reformation and decreed that mass should only be celebrated in Latin. However, since Vatican II some Catholic Churches have stopped using Latin, probably because some may believe that the Protestant Reformation has ended.

But now we have Ganoune Diop reciting the Old Roman Catholic Rite of Mass in the Traditional Tridentine language of Latin and in unity with the Council of Trent! Diop is singing in the same language and with the same melody that is used in the Vatican whenever Catholics praise their popes! This is an act of solidarity and unity with the ancient liturgy of the Roman Catholic Church. 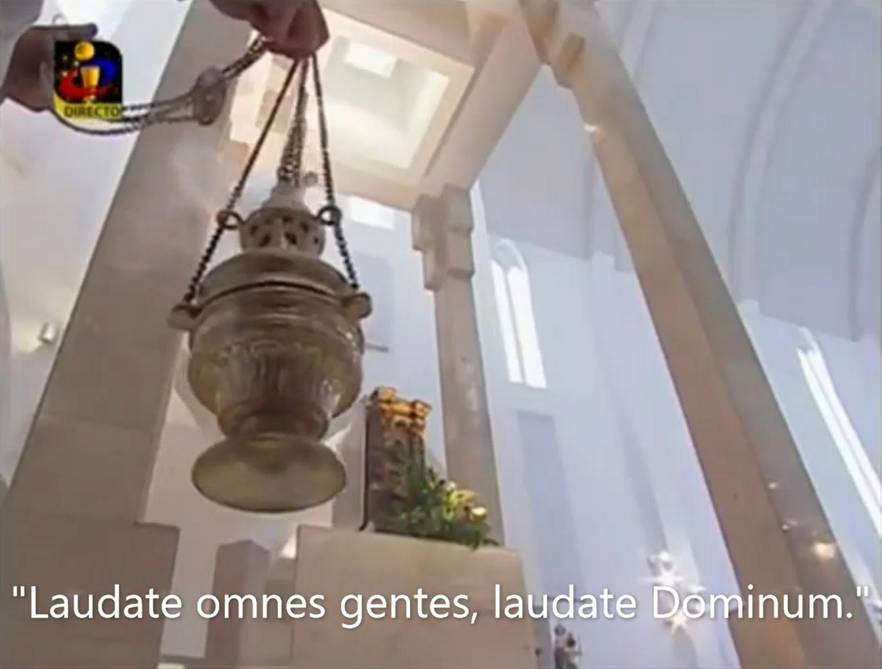 “Laudate Omnes Gentes” is sung during mass (see video below).

Who in Adventism would do such a thing? Ganoune Diop is the head of the religious liberty work. Is this what the present day watchmen are doing? Is this what we can expect from men who are entrusted with sacred duties? Can anyone in their right mind truly say that this is the same work that Alonzo T. Jones did when defending religious liberty during the 19th Century?

Will singing in Latin become the highest virtue in the religious liberty work today? We already have some Seventh-day Adventist pastors participating in mass. [2] We have other pastors dressing up like Catholic priests. [3] Now Diop is singing their songs in Latin from memory and without a song sheet! This is not Adventism. This is Romanism and we are fulfilling the following predictions made over 100 years ago:

“In the book Living Temple there is presented the alpha of deadly heresies. The omega will follow, and will be received by those who are not willing to heed the warning God has given” (Selected Messages, Vol. 1, p. 200).

The “Alpha of Deadly Heresies” had to do with introducing a system of philosophy that would neutralize the fundamental principles and landmarks of our faith. Dr. Kellogg attempted to turn our schools and sanitariums into non-Seventh-day Adventist entities, which meant that the distinctive features of our faith would disappear from our institutions.

In case you are waiting for some unmistakable sign from God that the “Omega of Deadly Heresies” has arrived – wait no longer. There will probably not be a clearer indication than what we are seeing at the highest levels of the church today. These men are doing what Dr. Kellogg could only dream about. We have embraced Kellogg’s concepts and we are voicing his sentiments.

Today, we are witnessing the greatest push towards ecumenical unity with Rome. We are becoming indistinguishable from each other. The Omega is not near; it’s here! And it is during this time that the faithful will stand up and lift up high the banner of Christ that makes us a uniquely “distinctive people.”

“A company was presented before me under the name of Seventh-day Adventists, who were advising that the banner or sign which makes us a distinctive people should not be held out so strikingly; for they claimed it was not the best policy in securing success to our institutions. This distinctive banner is to be borne through the world to the close of probation. In describing the remnant people of God, John says, ‘Here is the patience of the saints: here are they that keep the commandments of God, and the faith of Jesus’ Revelation 14:12” (Testimonies, Vol. 6, p. 44).

“There is to be no compromise with those who are worshiping an idol sabbath” (Ibid., p. 44).

Ganoune Diop can be reached at his email address: diopg@gc.adventist.org