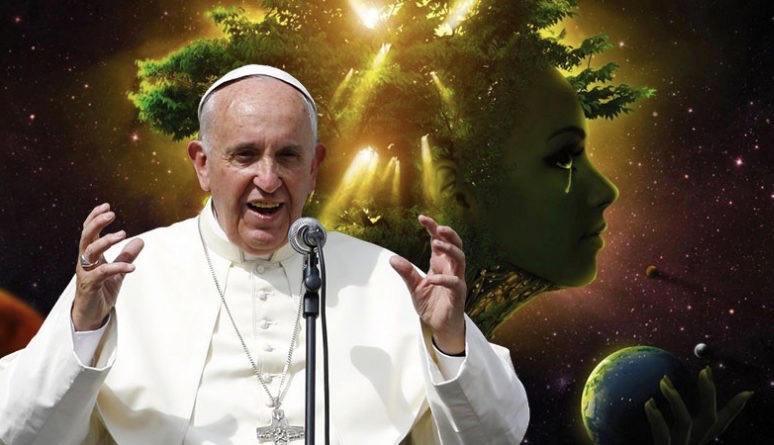 It was announced on Monday, July 12, 2021 that Pope Francis will appear in Glasgow next November to attend the United Nations Climate Summit. The announcement was made by the Catholic bishops of Scotland welcoming Pope Francis to the COP26 conference. [1]

Pope Francis has already called on political leaders planning on attending the climate change summit in Glasgow, Scotland, UK to “accelerate their plan to address the climate crisis and to act now.” [2] Here again we see a religious leader dictating to the heads of government to implement the Pope’s dogma on climate – Laudato Si’ (Sunday sacredness).

The churches in the UK are calling for “climate focused services” on “Sunday” ahead of the climate summit scheduled for November. This is an ecumenical effort by Anglicans, Baptists, Roman Catholics, Lutherans, Methodists, Orthodox, Pentecostals and Evangelicals to host a “National Climate Sunday Event” in order to raise awareness to the climate crisis. [3]

It is regrettable that the Pope is not attending COP26 to revive the church from moral decadence or to preach the gospel. No. His plan is to diminish biblical truth by promoting a pantheistic Mother Earth discourse to world leaders. He will be pushing green earth spiritualism, and this is not by accident. It is part of the same plan that promotes the great global reset of which Francis has become one of the main supporters.

The Pope’s message is not about Christ, faith, obedience to God’s law, or revealed truth. It’s about endless taxes, endless regulations, renewable energy, and the UN’s 2030 agenda. The gospel has been replaced by a secular ideology. God is infinite. His truth is infinite. The earth and the universe are not. This earth will come to an end and will burn by the Lord Himself (2 Peter 3:10) no matter how much the Pope wants to save it. This present world will perish:

“And I saw a new heaven and a new earth: for the first heaven and the first earth were passed away; and there was no more sea.” Revelation 21:1.

The Pope is not proclaiming God’s true message about the end times. Make no mistake, Pope Francis has demonstrated his devotion to a new gospel that venerates this old world by inventing a new “ecological conversion” because of our new “ecological sins.” The Pope is warning that Mother Earth is punishing our world with a new “ecological justice” that never forgives. And the solution to this problem, according to his green encyclical Laudato Si‘ is to take care of nature by implementing a green ecological Sunday law.

Rome is determined to spread its pantheistic heresies throughout the earth. Our world is facing a spiritual crisis of unimaginable levels. We are daily being bombarded with grave errors and “doctrines of devils” (1 Timothy 4:1) that are worse than any pandemic. We are in a crisis of faith that is more dangerous than the current so-called COVID-19 crisis.

So much effort and expense is being used to save the world from the so-called pandemic and climate crisis. But what is being done to stop the spread of these dangerous pantheistic heresies? Nothing. What are the churches doing to protect themselves from modern-day spiritualism? Not a thing. What are most Seventh-day Adventists doing during this period when pagan idolatry is being revived? Nothing at all. Our world has been left completely unprotected from the wave of deadly heresy that is sweeping the world. And God expects us to stand up and meet this challenge by boldly proclaiming His gospel during this time.

“Spiritualism is now changing its form and veiling some of its more objectionable features, [it] is assuming a Christian guise … While it formerly denounced Christ and the Bible, it now professes to accept both.” (Great Controversy, pp. 557, 558).

“Satan has long been preparing for his final effort to deceive the world … Little by little he has prepared the way for his masterpiece of deception in the development of spiritualism” (Great Controversy, p. 561).