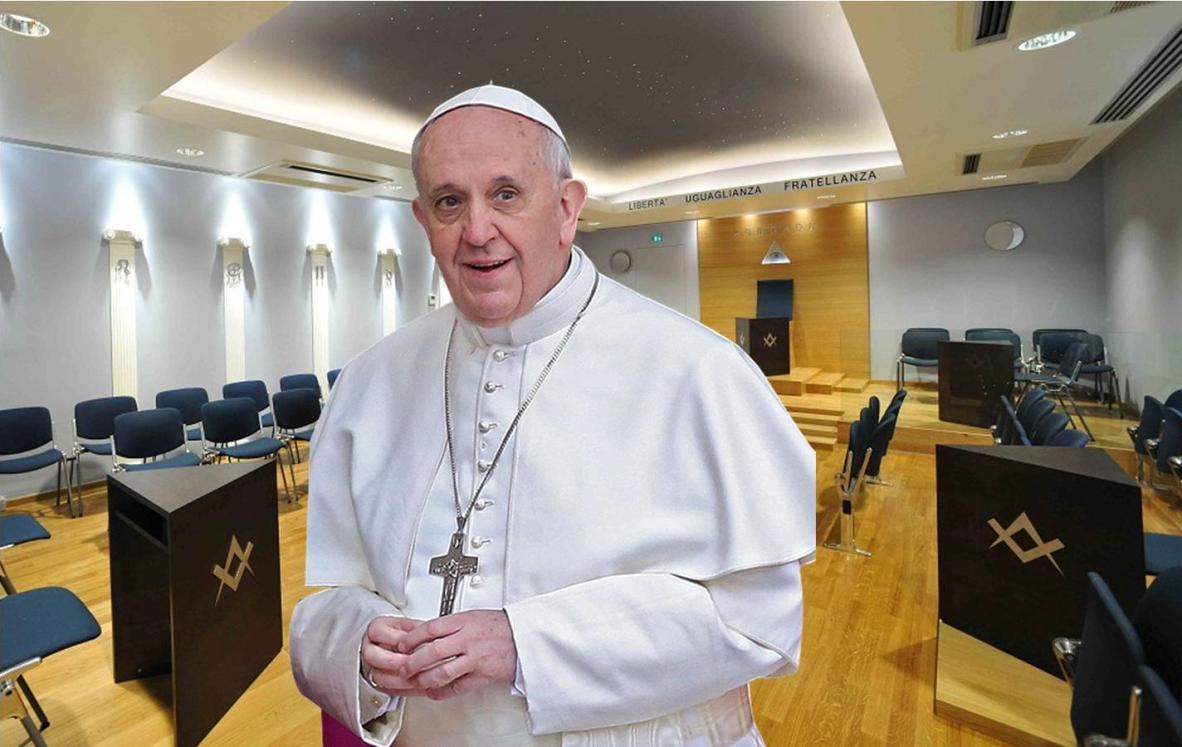 Fratelli Tutti is the Masonic blueprint for the New World Order, complete with the heresy that embraces all religions and all beliefs into one family. This is the heart of the papal encyclical, Fratelli Tutti. [1] It goes completely against the teachings of the gospel and is the very opposite of the Three Angels’ Message.

First, Fratelli Tutti was embraced by the Freemasons in Spain who praised Pope Francis’ recent encyclical, calling it part of the great principles of Freemasonry. [2] Now the Grand Masonic Order of Italy, called the Grand Orient of Italy, located in Rome, is calling the Pope’s plan for a universal brotherhood the “great mission and dream” of Freemasonry. 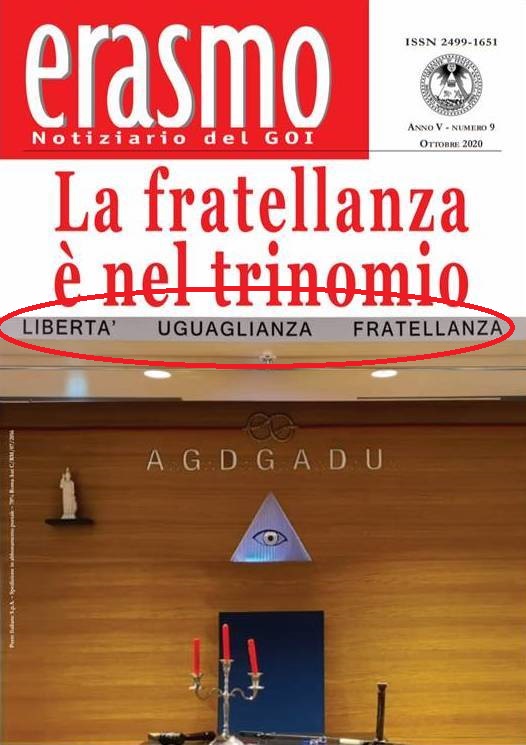 The Grand Orient Masonic Lodge of Rome, Italy called Fratelli Tutti their “mission and dream.” You can see the Masonic principles of Liberty, Equality and Fraternity – the same message contained in the Pope’s encyclical.

In the October 2020 issue of the Grand Orient’s magazine “Erasmo,” the Freemasons in Rome acknowledge with jubilation that Pope Francis is using the fundamental principles of masonry to promote his encyclical. The article starts on page 4 and is entitled “Church and Freemasonry: A Masonic Value.” The Freemasons in Rome wrote:

In his latest encyclical “All Brothers” (Fratelli Tutti), published on October 3, Pope Francis expressed in an absolutely unprecedented way, the idea of universal brotherhood, as a bond which unites all human beings, regardless of beliefs, ideology, skin color, social background, language, culture and nation. It is a way of thinking that is close to the ideals that have been the foundations of Freemasonry since the beginning. For over 300 years the principle of “brotherhood” has been an inseparable part of the 3 principles of Masonry that are placed in the temples along with “freedom” and “equality.”

Realizing a universal brotherhood has been the great mission and dream of Freemasonry from the very beginning. This has been emphasized in their comments by some philosophers, journalists and also by some high prelates of the Holy Roman Church by expressing themselves unreservedly in favor of the message that emerges from Pope Francis’ encyclical. A theological barrier that the Pope apparently decided to overcome by choosing once again to be inspired by St. Francis of Assisi, who felt himself to be ‘a brother of the sun, the sea and the wind’ and who knew himself to be much more at one with those who, like him, were of human flesh. [3] [4] 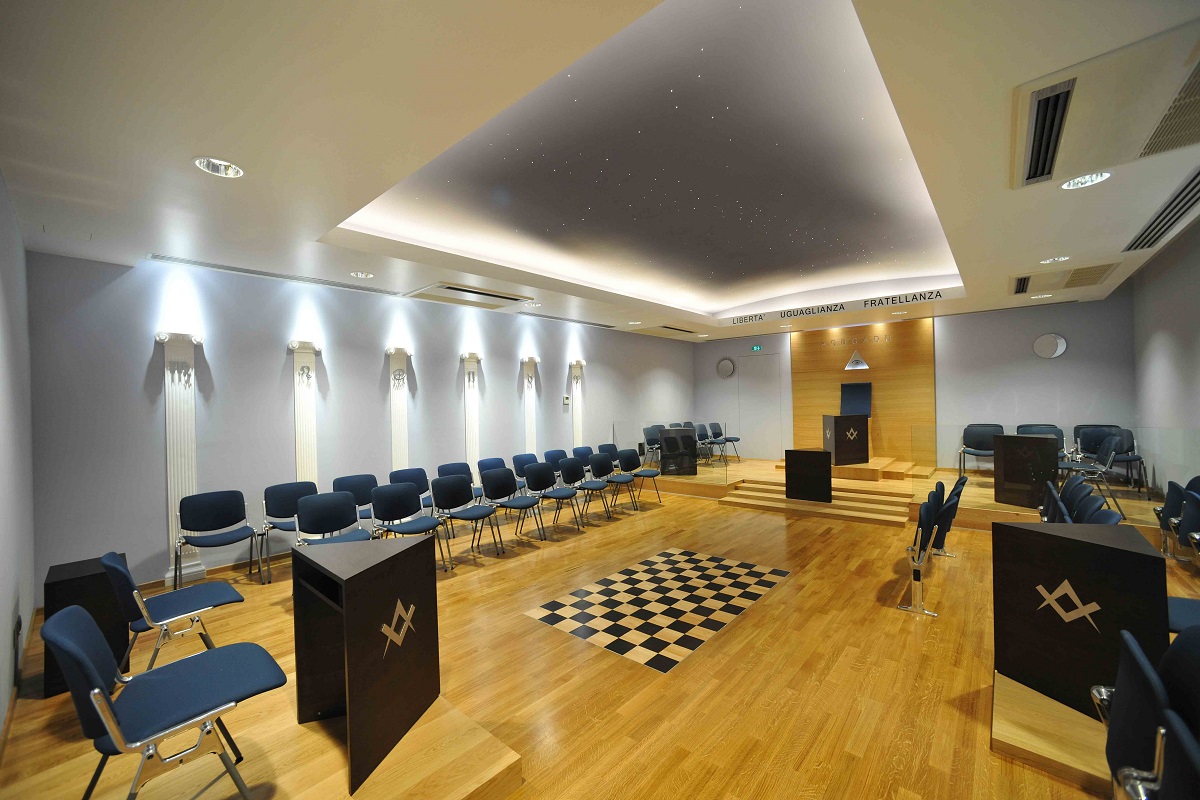 Here is the Grand Orient Masonic Lodge located in Rome, Italy. [5] (Best viewed on desktop computers). You can see the Freemason motto: “Liberty, Equality and Brotherhood” written in their temple. This motto was used by the Freemasons during the French Revolution.

What has happened to the fallen human nature and the depravity of the soul caused by sin? There is no mention of this. What happened to the words of Christ in His gospel when He says, “Verily, verily, I say unto thee, Except a man be born again, he cannot see the kingdom of God” (John 3:3)? What happened to the command that says, “Go ye therefore, and teach all nations, baptizing them in the name of the Father, and of the Son, and of the Holy Ghost” (Matthew 28:19)? And what about God’s end-time, world-wide proclamation that says, “Come out of her (Babylon) my people” (Revelation 18:4)?

All of these God-given responsibilities are being eliminated. The Pope’s new vision of fraternity, liberty and equality is humanistic and secular, rather than centered on Christ and His gospel commission. It is based on Freemasonry and embraces every god under the sun. Christ, the everlasting gospel and the Three Angels’ Message are sacrificed. The price for the Pope’s aspiration for universal brotherhood and world peace is the elimination of biblical truth. And Seventh-day Adventists are being deceived and tricked into falling for this. [6] 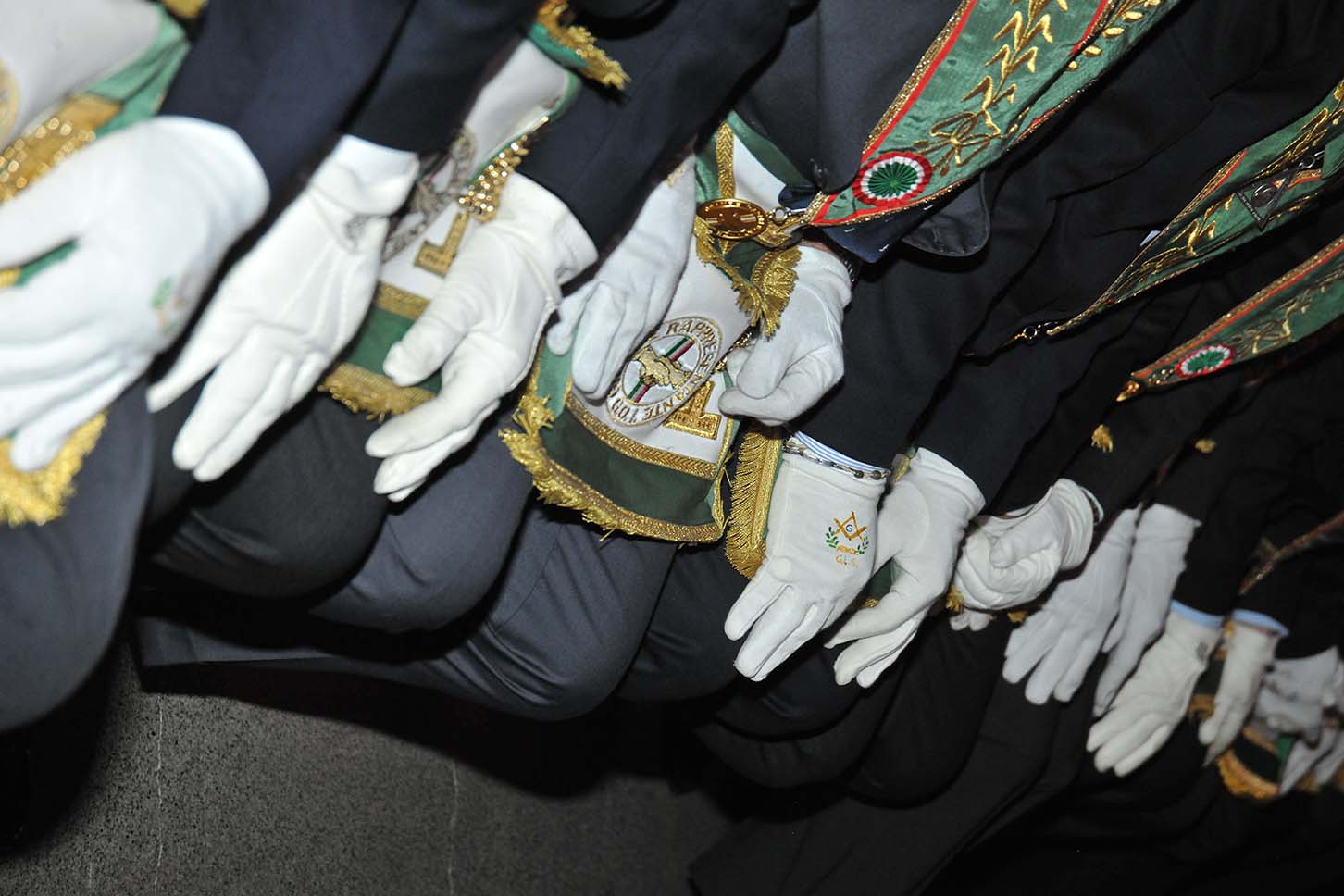 The Grand Orient Masonic Lodge located in Rome, Italy, pictured above, is in full support of all who embrace their Freemason principles contained in Fratelli Tutti.

There will never be true lasting equality until the world understands that we are all equally sinners and in need of salvation through Jesus Christ:

And once we have believed the gospel, once we are baptized, we will obtain the true dignity that comes as adopted sons and daughters of God:

Regarding the biblical concept of liberty, Christ again tells us in His gospel that true liberty is freedom from the devil and sin. We become free when Christ delivers us from the power of the evil one. Can we afford to leave people in bondage and ignorance of the divine truth of God’s liberty?

“If ye continue in my word, then are ye my disciples indeed; And ye shall know the truth, and the truth shall make you free.” John 8:31, 32.

“Jesus answered them, Verily, verily, I say unto you, Whosoever committeth sin is the servant of sin. And the servant abideth not in the house for ever: but the Son abideth ever. If the Son therefore shall make you free, ye shall be free indeed.” John 8:34-36.

“He that committeth sin is of the devil; for the devil sinneth from the beginning. For this purpose the Son of God was manifested, that he might destroy the works of the devil.” 1 John 3:8.

According to the Holy Scriptures, true unity and communion is found in the brotherhood of believers, not in unbelievers. Therefore, worshipers of Mother Earth and other non-biblical religions do not have the gift of faith in the gospel of Jesus Christ. Therefore, they cannot be called “believers” in the biblical sense of the word. Pagans and non-Christians do not accept Divine Revelation as it was given to us through the Bible. They reject Jesus Christ or place Him on the same level as Buddha, Krishna or Muhammad. The word of God is clear; the biblical brotherhood is made up of those who have come out of darkness (pagan superstitions):

“But ye are a chosen generation, a royal priesthood, an holy nation, a peculiar people; that ye should shew forth the praises of him who hath called you out of darkness into his marvellous light … Honour all men. Love the brotherhood. Fear God. Honour the king.” 1 Peter 2:9, 17.

Fratelli Tutti is the gospel of the world. It is the gospel of Pope Francis. It does not challenge anyone, it does not offend anyone and it makes everyone happy, at least superficially. This false universal brotherhood is nothing more than a collection of vague and empty sentiments; and sadly, this is the message that our churches are embracing.

On the other hand, true biblical faith is dangerous. It is unpopular. It can be difficult to stand up to defend God’s truth because it actually challenges the prevailing sins of the day. It denounces sin. It calls people to repentance. The world is hostile towards those who embrace and preach the pure religion of Christ. If you preach God’s message, as given in His word, you will be labeled a troublemaker or worse.

But if we exchange the Gospel of Christ for a watered-down version that is empty of biblical substance in hopes of avoiding the insults and mistreatment of the world, we will be judged as frauds and hypocrites in the courts of heaven:

“I marvel that ye are so soon removed from him that called you into the grace of Christ unto another gospel: Which is not another; but there be some that trouble you, and would pervert the gospel of Christ. But though we, or an angel from heaven, preach any other gospel unto you than that which we have preached unto you, let him be accursed. As we said before, so say I now again, If any man preach any other gospel unto you than that ye have received, let him be accursed. For do I now persuade men, or God? or do I seek to please men? for if I yet pleased men, I should not be the servant of Christ.” Galatians 1:6-10.